Facebook users became indignant upon seeing a post showing an “aswang,” when in fact the creature was none other than the Philippine flying lemur, locally called “kagwang.” The kagwang was seen held by an unknown man, and no one knows what happened to the lemur, which may be endangered.

Facebook user Christine Mangubat claimed that the lemur devoured other creatures in the area. However, kagwang is a folivore that feeds on fruits, flowers and leaves. 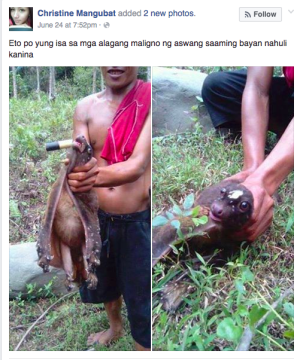 The controversial post was liked 5,800 times, shared 6, 510 times, and commented on by 4,515 users as of this writing. Many users bashed Mangubat for her “ignorance” and admonished her to do some “research and study.” Others chastised her for “using Facebook but not using Google.”

Kagwang (Cynocephalus Volans) , whose name is derived from a Visayan expression of anger, is labeled by environmental organizations as an “endangered species.” It is found in the Mindanao Faunal Region and in the Eastern Visayan provinces of Bohol, Leyte and Samar. Although the kagwang does not fly and is not classified as a lemur, it is an “expert” at gliding on trees because of its membrane.  Gianna Francesca Catolico