Spending 20 years of your life sedentary could double your risk of death, says study 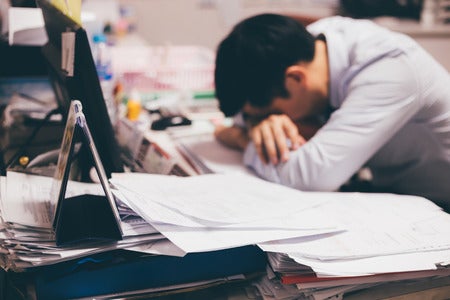 New European research has found that two decades of a sedentary lifestyle appears to put individuals at a two times higher risk of premature death compared to those who are physically active.

Carried out by researchers at the Norwegian University of Science and Technology, Trondheim, Norway, the new study set out to investigate how changes in physical activity over 22 years were linked to death from cardiovascular disease and from all causes.

A total of 23,146 men and women were included in the study, all of whom were residents of Norway and aged 20 and older.

The participants were asked to report on the frequency and duration of their physical activity during their free time in 1984 to 1986 and 2006 to 2008.

Physical activity was classed as inactive, moderate (defined as less than two hours a week), and high (defined as two or more hours per week). Participants were divided into groups according to their activity levels at each survey. Those who reported a high level of exercise during both surveys were classed as the reference group.

The findings, presented on Saturday at ESC (European Society of Cardiology) Congress 2019 together with the World Congress of Cardiology, showed that participants who were inactive in both 1984 to 1986 and 2006 to 2008 had a two-fold higher likelihood of death from all causes and a 2.7-fold greater risk of dying from cardiovascular disease, compared to the reference group.

The results also held true even after the researchers had taken into account influencing factors such as body mass index, age, sex, smoking, education level and blood pressure.

When looking at those whose physical activity levels changed over the course of the study, the researchers found that those who went from being inactive to highly active had a risk of death that was between those who were continually active or continually sedentary.

In contrast, those who went from being highly active to inactive had a similar risk of dying as those who were inactive at both surveys.

Study author Dr. Trine Moholdt commented on the results saying, “Our findings imply that to get the maximum health benefits of physical activity in terms of protection against premature all-cause and cardiovascular death, you need to continue being physically active. You can also reduce your risk by taking up physical activity later in life, even if you have not been active before.”

“Do activities you like and get more movement into your everyday life,” she added. “For example, walk to the shops instead of driving, get off the metro a stop early, and use stairs instead of the lift. I recommend everyone to get out of breath at least a couple of times each week.” JB

The risks of sedentary living

TOPICS: cardiovascular disease, Death, exercise, sedentary, sedentary lifestyle
Read Next
Getting flu shot could lower risk of death for those with high blood pressure
EDITORS' PICK
Drilon wants repeal of penal provisions in proposed Bayanihan extension law
Notice of 2020 regular meeting of stockholders June 18, 2020
LIST: What to expect in areas under GCQ, MGCQ
DOTr bares 2 phases of public transport revival in GCQ areas
SM prepares for ‘safe malling’
Leveling up your ‘lutong bahay’ with the kitchen companion you never knew you needed
MOST READ
LIST: What to expect in areas under GCQ, MGCQ
DOH explains: Only 109 of record-high 539 COVID-19 patients were ‘fresh cases’
Duterte approves Metro Manila’s shift to GCQ starting June 1
300 buses to resume operations in NCR by June 1 — Año
Don't miss out on the latest news and information.