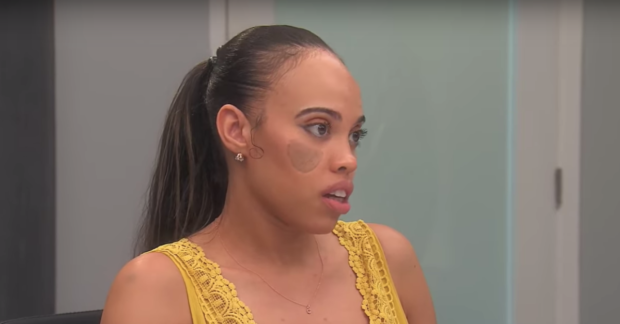 A woman is growing “literal pubic hair” on her face after a skin graft from her groin was used to repair a dog-bite injury.

Crystal Coombs was bitten by a pit bull when she was 9 years old, she said on the reality TV show “Botched.” The program uploaded a clip from the episode with Coombs on its YouTube channel yesterday, Jan. 6.

When the attack happened, Coombs said she only recalled her grandfather holding the animal. She then confirmed to the doctors that the dog had bitten out a “chunk of tissue” from her face.

Following the incident, she was taken to an emergency room (ER) for treatment. However, Coombs’ injury was left open “for a while” because the doctors suggested she wait for a plastic surgeon.

Nassif stressed that Coombs was lucky the ER physicians did not try to fix the injury, because they did not have the same skill set as plastic surgeons.

When she met with a plastic surgeon, Coombs said, “[H]e suggested the skin graft, [and to] take it from the groin.” The pubic hair started growing after the procedure.

“I don’t believe that the doctor mentioned I would grow pubic hair out of my patch,” she added. “I don’t remember that.”

Meanwhile, Dubrow pointed out that it was “interesting” for the doctor to choose skin from the groin for the surgery.

“They could’ve done the back, the abdomen,” he said. “You obviously wouldn’t do the armpits.”

Despite the odd outcome of the procedure, Dubrow added that it was “expertly done reconstruction work” because the affected area is located near “many facial nerve branches.”

When asked about how the patch has affected her since, Coombs said she had not worried about it throughout her life. However, she has become more conscious of it after giving birth to a little girl.

The mother added that she wants to have the skin graft fixed because she is concerned that her daughter may be teased for how Coombs looks.

Coombs then asked the doctors if they could make the patch on her face “as small and minimal as possible.” But the doctors are wary about working on it, noting that “even a little” alteration could change the entire shape of her face and make it look “very deformed.”  /ra