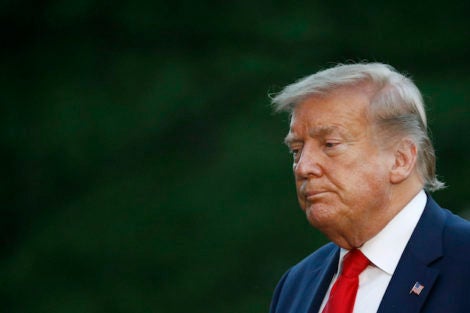 President Donald Trump walks across the South Lawn of the White House in Washington, Saturday, May 30, 2020, after stepping off Marine One as he returns from Kennedy Space Center for the SpaceX Falcon 9 launch. (Photo by PATRICK SEMANSKY / AP)

OAKLAND, California — President Donald Trump posted identical messages on Twitter and Facebook this week. But while the two social platforms have very similar policies on voter misinformation and glorifying violence, they dealt with Trump’s posts very differently, proof that Silicon Valley is far from a united front when it comes to political decisions.

Twitter placed a warning label on two Trump tweets that called mail-in ballots “fraudulent” and predicted problems with the November elections. It demoted and placed a stronger warning on a third tweet about Minneapolis protests that read, in part, that “when the looting starts the shooting starts.”

“Facebook doesn’t want to alienate certain communities,” said Dipayan Ghosh, co-director of the digital platforms and democracy project at Harvard’s Kennedy School. “It doesn’t want to tick off a whole swatch of people who really believe the president and appreciate his tweets.”

Twitter, on the other hand has a history of taking stronger stances, he added, including a complete ban on political advertisements that the company announced last November.

That’s partly because Facebook, a much larger company with a broader audience, caught in the crosshairs of regulators over its size and power, has more to lose. And partly because the companies’ CEOs don’t always see eye to eye on their role in society.

“Our position is that we should enable as much expression as possible unless it will cause imminent risk of specific harms or dangers spelled out in clear policies,” Facebook CEO Mark Zuckerberg said in a post on his social network Friday.

Referring to the president’s comments about the Minneapolis protests, Zuckerberg said that he had “a visceral negative reaction to this kind of divisive and inflammatory rhetoric.” But Facebook decided, he said, to keep the president’s comment’s on the site because “we read it as a warning about state action, and we think people need to know if the government is planning to deploy force.”

More broadly, Zuckerberg has often said Facebook does not seek to be “the arbiter of truth.”

Still, Facebook has long used fact checks on its site, done by third-party news organizations such as The Associated Press, and it constantly uses algorithms to decide what to show its 2.5 billion users. And it is setting up an oversight board to decide whether to remove controversial posts.

Meanwhile, Twitter CEO Jack Dorsey tweeted that Twitter will “continue to point out incorrect or disputed information about elections globally.” But he added: “This does not make us an ‘arbiter of truth.’”

This is not the first time that a social media company clashed with the president. And with six months to go before the election, it won’t be the last.

“It sure looks like, in the face of pressure to follow the White House’s preferred speech policies, Facebook chose appeasement and Twitter chose to fight,” said Daphne Keller, a fellow at Stanford University’s Center for Internet and Society. “Why the difference? … Maybe Facebook thinks it has more to lose by alienating Republicans.”

Trump and fellow conservatives have been claiming for years that Silicon Valley tech companies are biased against them. But there is no evidence for this — and while the executives and most employees of Twitter, Facebook and Google may lean liberal, the companies have stressed they have no business interest in favoring on political party over the other.

The trouble began in 2016, two years after Facebook launched a section called “trending,” using human editors to curate popular news stories. Facebook was accused of bias against conservatives based on the words of an anonymous former contractor who said the company downplayed conservative issues in that feature and promoted liberal causes.

Zuckerberg met with prominent right-wing leaders at the time in an attempt at damage control. In 2018, it shut down the “trending” section but by then the narrative of conservative bias had spread far and wide. Congressional hearings about conservative bias followed, with the leaders of Google, Twitter and Facebook defending their companies and explaining that it would not be in their interest to alienate half of their U.S. users.

While critics have accused both Zuckerberg and Dorsey of cozying up with one side of the political alley or the other, Zuckerberg appears more intent on remaining in the mushy middle — even when that’s proving increasingly difficult.

“Facebook doesn’t want to alienate anybody,” said Ethan Zuckerman, director of the Massachusetts Institute of Technology’s Center for Civic Media. “Twitter seems more comfortable saying: ‘Look, as a private platform we reserve the right to do whatever want to do.’ … They’re right. This is not a First Amendment issue” involving government censorship.

Zuckerman said that tech companies’ approach to handling misinformation and incitement to violence has had to change. “Both Zuckerberg and Dorsey are from the generation of internet entrepreneurs that had a very strong freedom of speech bias… you should be able to say whatever you want, and no should block it,” Zuckerman said.
But that hands-off approach no longer appears sustainable.

Perhaps even more than Trump‘s provocative tweets the coronavirus pandemic is forcing tech firms to rethink what goes unchallenged on their platforms. Zuckerman noted, for example, that both Facebook and Google have been vigilant about barring the conspiracy theory video “Plandemic,” which makes false claims about COVID-19 and therefore poses a potential threat to public health.

“It’s really a no-win scenario” for social media companies, said Patrick Hedger, research fellow at the Competitive Enterprise Institute. Conservatives will complain if they block or correct Trump statements. Liberals will cry foul if they don’t.

Hedger also noted that “the unmoderated world does exist,” pointing to Gab.com, which has become a haven for extremist views. “The unmoderated internet is not a pretty place,” he said.