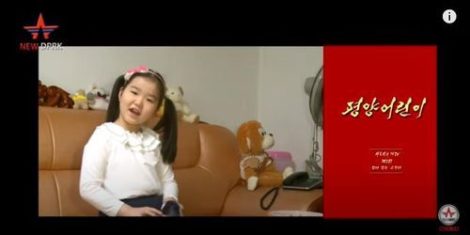 (New DPRK-Yonhap) via The Korea Herald

That’s a departure from North Korea’s traditional way of sending messages to the outside world: all-serious newscasters using a hyped and bellicose tone to read provocative statements about nuclear or missile tests.

North Korean propagandists had been experimenting with the global video-sharing platform, but they went no farther than uploading edited videos from state media, often featuring Ri Chun-hee, a famous North Korean anchor known for her assertive and dramatic style of delivering news.

North Korea is now embracing a friendlier style to appeal to younger viewers, as seen on recent videos uploaded to channels, like New DPRK and Echo DPRK.

New DPRK, a YouTube channel believed to be run by the North, has recently posted “vlogs,” or video logs, of a seven-year-old Ri Su-jin describing the daily lives of kids in Pyongyang.

In one of her videos, Su-jin gives a tour of her apartment building and around her house, showing goods, such as a piano, a fan and a large couch.

Dressed in a modern-style blouse with her phone in one hand, she gives a tour around Pyongyang, with stops at a luxury department store named Taesong and Ryomyong Street in a calm voice.

Un-A claims to tackle fake news and check facts regarding the coronavirus in a recent video, following a report that North Koreans were panic buying in Pyongyang due to the coronavirus.

In the video, uploaded in April, she interviews shoppers at Taesong in rebuttal to reports that claimed prices had gone up in North Korea.

“I think the fake news is the last thing we need in such fierce battle with COVID-19,” she says in the video.

Experts say the change in their propaganda style is directed towards foreign audiences.

“It is an adjustment in their propaganda style in response to the emergence of a new online platform,” said Yang Moo-jin, a professor at the University of North Korean Studies.

“Their purpose is to promote their politics and love for the people to the outside audience in an effective way rather than sending a message to its own people,” he added. (Yonhap)

TOPICS: Internet, North Korea, propaganda, technology, Youtube
Read Next
Sega unveils Game Gear Micro on 30th anniversary
EDITORS' PICK
Water remains our saving grace right now
Current dominant strain of COVID-19 more infectious than original—study
EuroMillions Superdraw: A lottery draw unlike any other is coming to the Philippines
‘Justice will be done,’ Duterte assures as he vowed probe on Jolo incident to bare ‘truth’
Smart releases Hyun Bin’s second TVC
DOLE: Return of OFWs’ remains from Saudi to be ‘delayed,’ deadline moved to ‘early next week’
MOST READ
Locsin warns of ‘severest response’ if China’s army drills in SCS ‘spill over’ to PH domain
BREAKING: Duterte signs anti-terror bill into law
Duterte tells military: No other president looked at you the way I did
INQ animated bar graph: How severe is COVID-19 in Southeast Asia
Don't miss out on the latest news and information.