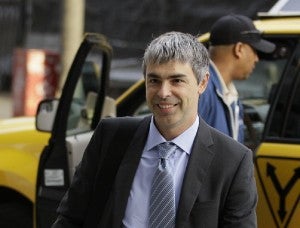 Google CEO Larry Page walks into a federal building in San Francisco, Wednesday, April 18, 2012. Oracle called Page to the stand Tuesday, and he's to return Wednesday on the third day of the trial. On Tuesday, Oracle CEO Larry Ellison acknowledged he wanted to compete against Android in the smartphone market before deciding instead to sue his potential rival for copyright and patent infringement. (AP Photo/Eric Risberg)

SAN FRANCISCO— Google CEO Larry Page spent nearly an hour in a federal courtroom Wednesday deflecting questions about his role in a copyright dispute over some of the technology in his company’s Android software for smartphones.

The taciturn Page often looked uncomfortable on the witness stand as he sparred with David Boies, a tenacious lawyer who made headlines for grilling former Microsoft Corp. CEO Bill Gates in an antitrust lawsuit filed by the U.S. government in 1990s.

In this trial, Boies is working for business software maker Oracle Corp., which accused Google Inc. of building its Android software by stealing pieces of the technology from Java, a programming platform that Oracle now owns.

Oracle, which is based in Redwood Shores, California, is seeking hundreds of millions in damages and royalties for Google’s future use of Android, which powers more than 300 million smartphones and tablet computers.

In a measure of the trial’s high stakes, Oracle has already called two multibillionaire executives to the witness stand. Oracle’s own CEO, Larry Ellison, appeared Tuesday, as did Page for a brief round of questioning before his Wednesday return for more extensive interrogations. In both appearances, Page sported a suit and tie, a departure from the casual attire he wears around Google’s Mountain View, California headquarters.

Page looked like he wished he could have stayed in Mountain View Wednesday. During his time on the stand, he rarely looked at Boies and frequently said he couldn’t remember seeing some of the internal Google documents that Oracle is using to build its case.

Page’s foggy memory seemed to exasperate Boies, perhaps because the haze may have worked to Google’s advantage.

Boies’ attempts to display exhibits containing inside information about Google were blocked by U.S. District Judge William Alsup because Page couldn’t recall seeing them. Although it’s unclear what was in the exhibits, it was clear Google’s own lawyers didn’t want the contents to be exposed in a public courtroom.

Some of the evidence currently being kept under court seal is believed to include disclosures about how much money Google has made from Android since the software hit the market in 2008 — a financial nugget that Google has never revealed.

Although Google gives away the software to mobile device makers, Android brings in revenue from digital advertising and sales of mobile applications that run on the system.

Boies spent much of his interrogation trying to prove Page and other Google executives realized that the company probably would have to pay a licensing fee to use elements of Java as far back as 2005. That’s when Page orchestrated the deal to buy the Silicon Valley startup that hatched Android and brought in Android founder Andy Rubin to oversee an effort to make Google’s online search engine, advertising and other services more accessible on mobile phones.

When shown emails from Rubin and others mentioning the need to license some of Java during 2005 and 2006, Page linked the references to Google’s attempts to build Android in a partnership with Sun Microsystems Inc., Java’s owner at that time. Oracle entered the picture in 2010 when it bought Sun Microsystems for $7.3 billion.

Page later elaborated on Google’s discussions Sun under while he was under more cordial questioning from one of his company’s lawyers. “We really wanted to use Sun’s technology,” Page said. “It would have saved us a lot of time and trouble to use Sun’s technology. When we weren’t able to have our business partnership, we went down our own path.”

Oracle’s case hinges on whether Android infringes on 37 copyrights for “application programming interfaces,” or APIs, that provide the blueprints for making much of Java work effectively. Other major companies, including IBM Corp, have licensed some of Java’s APIs, but Google hasn’t — one of the few things that Boies was able to get Page to confirm during his testimony Wednesday.

Google contends the Java APIs aren’t covered under U.S. copyright law because they aren’t a form of creative expression.

But various Google emails presented in the trial so far have included internal recommendations to work out a license for some elements of Java. One August 2010 email from Google engineer Tim Lindholm to Rubin mentions being asked by Page and Google’s other co-founder, Sergey Brin, to review possible alternatives to Java. Lindholm advised Rubin all the other choices “suck” and urged him to negotiate a license for Java.

When Boies asked about Lindholm’s email in Wednesday, Page wouldn’t acknowledge telling Lindholm to look into the issue, let along knowing him. Page did point out that Lindholm’s email had misspelled Brin’s first name as “Sergei.”

In an apparent attempt to cast Google’s stance on Java as hypocritical, Boies asked Page if his company copyrighted the APIs that run its services. “I am not sure,” Page responded. “I think things are copyrighted by default, but I am not a lawyer.”

Page left the courtroom smiling, but still didn’t look completely relaxed. Maybe that’s because the judge told him that Oracle would probably call him back to testify before the trial is over.