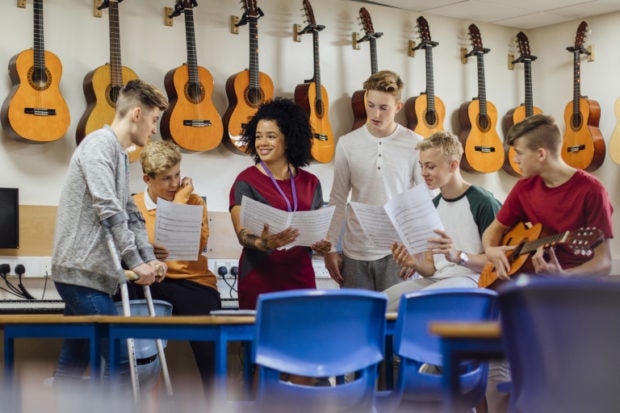 A new study has found that those of us who are gifted musically may have been born with a natural ability to distinguish between the highs and lows, also known as the major and minor notes, in music.

Carried out by neuroscientists at York University, Canada and the University of California, United States, the new study looked at 30 six-month-old infants who each heard a tone-scramble, which is a series of notes whose quality (major vs. minor) signaled the location (right vs. left) where a picture would appear. The babies had to decide which side to look when they heard a sound, and a picture would appear on either the right or left depending on whether it was a major or minor tone scramble.

The findings, published in the Journal of the Acoustical Society of America, showed that for 33% of infants, after listening to the minor and major sounds their eye movements predicted where the picture would be with near perfect accuracy, while for the other 67% of babies, eye movements were not related to the picture’s location.

“What we measured over time was how the infants learned the association between which tone they heard and where the picture is going to show up. If they can tell the difference in the tone, over time, when they hear the major notes for example, they’ll make an eye movement to the location for the picture even before the picture appears because they can predict this. This is what we are measuring,” says researcher Scott Adler.

The numbers are also in line with previous studies on adults, which have shown that approximately 30% of adults can discriminate between major and minor notes, but 70% cannot, regardless of their level of musical training or music exposure.

“At six months, it’s highly unlikely that any of these infants have had any formal training in music,” says Adler. “Yes, parents play music for children. All children in western civilization hear music, but they don’t get that specific training in music. This breakdown, therefore, is due to some inborn mechanism.”

The results not only back up the common belief that musicians are born with a talent for music, suggesting that this natural ability could be genetic, but they could also have implications for developing an appreciation of the emotional content of music say the researchers, as it’s the major and minor notes that give music emotion.

Apple Music launches on the web