UP site hacked over Scarborough Shoal

MANILA, Philippines—Hackers attacked the official website of the University of the Philippines System, forcing the state university to temporarily bring down the site.

The defaced homepage still carried the site masthead and side contents but a map of the West Philippine Sea (South China Sea) with Chinese characters replaced center contents.

Below the map was a caption, “We come from China! Huangyan Island is Ours!” posted repeatedly.

Huangyan Island is the Chinese name for Scarborough Shoal, where the Philippine coast guard has been facing off with Chinese vessels in a standoff that began April 10.

PH not intimidated by Chinese gunboat

Later, the website was brought down with the following downtime notice:

“The University of the Philippines System website is currently undergoing maintenance. The UP Computer Center is conducting an evaluation of the website and its contents. This website will be restored to its operational status as soon as the maintenance checks have been completed.”

Danilo Arao, assistant vice president for public affairs at UP Diliman, said the hacking happened at around 3 a.m. Friday.

“No vital data in the server was compromised, according to the University Computer Center,” said  Arao, also the director of the System Information Office.

“We expect to get it back online soon,”  he  said.

He said he was alerted on the matter by some media practitioners and UP officials who stumbled on the defaced website.

At the same time, Arao  condemned the cyber attack.

“I strongly denounce the attempt to deprive the UP community of vital information, particularly the schedule of commencement exercises in nine UP campuses and the April 2012 issue of the UP Newsletter which was uploaded last April 17,” he said.

The UP System website is the main portal to the university and its different campuses and units. It offers information, news updates and announcements for UP constituents. With a report from Julie M. Aurelio, Philippine Daily Inquirer 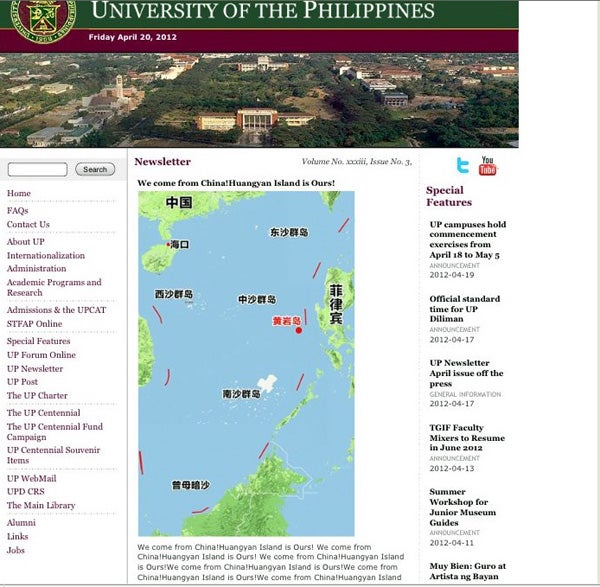