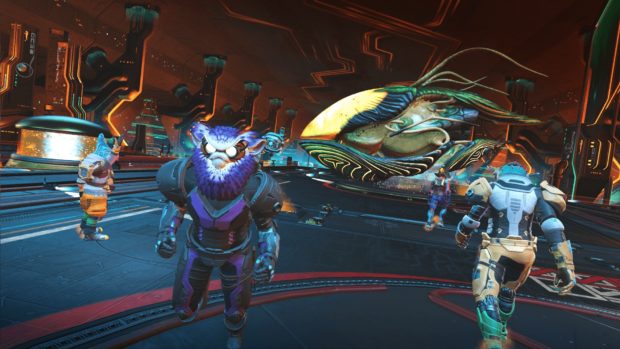 Ambitious, regularly updated, and steadily improved, “No Man’s Sky” is implementing full cross-platform multiplayer as it welcomes a cohort of Xbox Game Pass subscribers to its active playerbase. PlayStation 4, Xbox One and PC communities can expect to play together from June 11, 2020.

Having launched in 2016 with an underwhelming approach to multiplayer (it essentially didn’t exist, despite reasonable expectations) to debuting an eight-player online co-operative option in August 2019 (or up to 32 players on PC), “No Man’s Sky” is now entering the dimension of platform-agnostic experiences.

That means the entire “No Man’s Sky” community can expect to mix and mingle across the far reaches of a simulated galaxy.

Players will be identified by a platform logo next to their name, which may help contextualize player interactions as well as create an anecdotal impression of relative platform popularity.

The news follows Electronic Arts announcement that 2019 street-racing title “Need for Speed Heat” will now be a multiplayer affair; both “Need for Speed Heat” and “No Man’s Sky” become part of a relatively exclusive club of titles that connect players from the traditionally segregated PlayStation and Xbox platforms.

The meteoric rise of “Fortnite” in 2017 and 2018 helped force the change, as did, no doubt, strategic advantages for Microsoft Xbox and Nintendo in the face of Sony’s runaway PlayStation 4 success.