Google to ‘explore’ why Churchill photo missing from search list 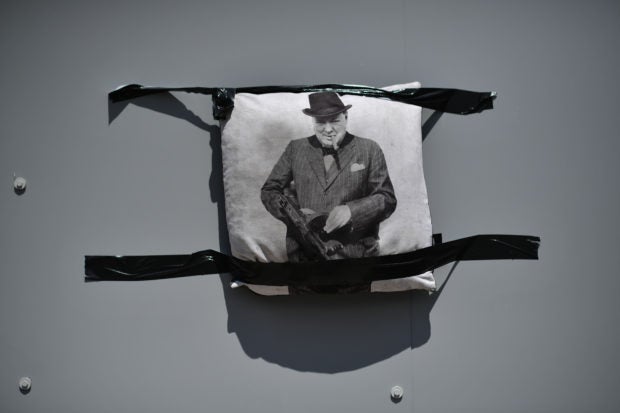 A cushion with a portrait of former Prime Minister Winston Churchill is seen on the cladding around his statue as members of far-right groups gather in Parliament Square, central London on June 13, 2020, in the aftermath of the death of unarmed black man George Floyd in police custody in the US. – Police in London have urged people planning to attend anti-racism and counter-protests on Saturday not to turn out, citing government regulations banning gatherings during the coronavirus pandemic. (Photo by Ben STANSALL / AFP)

LONDON — Google said Sunday it would explore why the picture of Britain’s World War II leader Winston Churchill disappeared from a top search results list of former UK prime ministers, during a controversy over his record on racism.

The search giant said the photo’s removal from its horizontal list atop search results for former British premiers was due to an automatic update and “not purposeful, ” but apologized “for any concern”.

It noted that the issue only applied to its so-called “knowledge graph” listing and that many images of Churchill were still easily found on its search engine.

“We’re aware an image for Sir Winston Churchill is missing from his knowledge graph entry on Google,” the firm’s search liaison arm said on Twitter.

“We apologize for any concern. This was not purposeful & will be resolved. Images in such panels are automatically created & updated. During an update, they can briefly disappear.”

The statement added his photo would be restored to the list as rapidly as possible.

“We’ll want to explore exactly why an automatic update caused it to disappear & see if there are any improvements in those systems to address.”

However, the change provoked a swift backlash on social media.

“Western Europe would almost certainly be enslaved if it wasn’t for the man whose photo is now absent.”

Britain’s WWII prime minister has become engulfed in controversy after a Black Lives Matter protest in central London last weekend led to his statue being defaced with the word “racist”.

The vandalism was widely condemned but Churchill critics also argue he was consistently bigoted and discriminatory to non-whites during his lengthy political career, with his policies leading to the death of millions during a famine in India in 1943.

Current Prime Minister Boris Johnson, who wrote a biography of Churchill, has called his targeting “absurd and shameful” and said anti-racism protests have been “hijacked by extremists”.

Thousands of self-styled “patriots”, backed by far-right groups, assembled in central London on Saturday vowing to guard statues and memorials there.

The gathering led to violent clashes with police, who made more than 100 arrests and saw six officers injured.