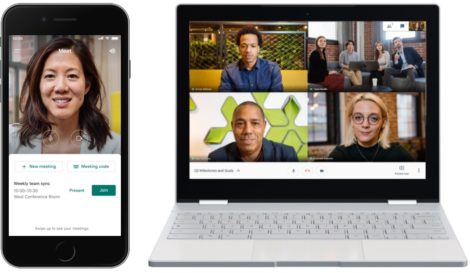 Google Meet is rolling out its noise cancellation feature to bring a smoother and less distracting communication experience in video calls.

Google Meet is the tech giant’s premium video conferencing product, which was made free in April as more people around the globe were in work-from-home arrangements and conducted meetings online.

Google introduced the “denoiser” last June 8, which is a feature to filter our background noise during video meetings, VentureBeat reported. It will be gradually rolled out, with some users getting it later in the month. The feature will be in Web first, followed by Android and iOS on mobile devices.

Serge Lachapelle, G Suite director of product management, demonstrated in a video on VentureBeat how the “denoiser” works. Though the human voice sounds muffled, there is no background sound as he tested it on a pen clicking, a bag of chips crinkling or metal clinking inside a glass.

To understand what is considered human speech versus noise, a machine learning model has been trained through thousands of Google’s own video conferences, YouTube videos and engineers playing loud musical instruments.

The project has been nearly two years in the making and was inspired by Lachapelle’s own experience in video conference rooms since he works in Sweden while others are in the United States.

“When we meet with the U.S., it’s usually around this time [morning in the U.S., evening in Europe]. You’ll hear a lot of cling, cling, cling and weird little noises of people eating their breakfast or eating their dinners or taking late meetings at home and kids screaming and all. It was really that that triggered off this project about a year and a half ago,” he told the news outlet.

Lachapelle and his team are also careful about not blocking out all sounds — singing, laughter and breathing can still be heard.

“We’re taking a softer approach at first, or sometimes we’re not going to cancel everything because we don’t want to go overboard and start canceling things out that shouldn’t be canceled,” he said. “Sometimes it’s good for you to hear that I’m taking a deep breath, or those more natural noises. So this is going to be a project that’s going to go on for many years as we tune it to become better and better and better.” Niña V. Guno/JB

Facebook Messenger Rooms can bring together 50 people in single call

Incomparable to real meetups, but making contact during video calls could still make us smile