Bejeweled, Minecraft among games inducted into hall of fame

ROCHESTER, N.Y.  — The World Video Game Hall of Fame inducted Bejeweled, Centipede, King’s Quest and Minecraft in a virtual ceremony Thursday that recognized their influence on the industry and the gamers who have spent tens of billions of hours playing them. 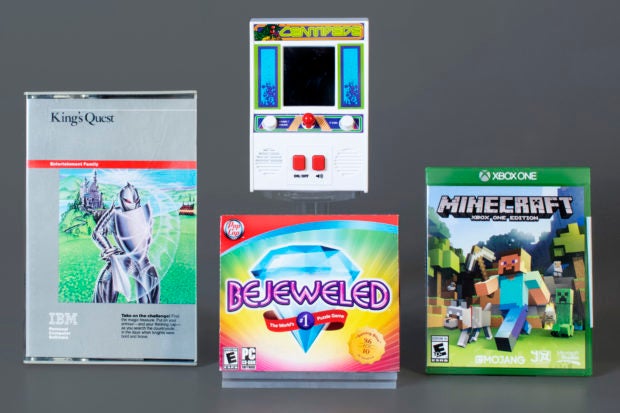 The hall of fame’s Class of 2020 was chosen from a field of 12 finalists that also included Frogger, Goldeneye 007, Guitar Hero, NBA Jam, Nokia Snake, Super Smash Bros. Melee, Uncharted 2, and Where in the World is Carmen Sandiego?

Atari’s Centipede is credited with bringing more female players into arcades when it debuted in 1981, challenging players to fire on an insect as it zigzagged down the screen. Developer Ed Logg’s team included Dona Bailey, one of the decade’s few female developers.

“It’s also one of the best-selling arcade games of that era and its fast-paced, bug-blasting gameplay is as challenging and satisfying to play today as it was decades ago,” Jeremy Saucier, the hall of fame’s assistant vice president for electronic games and interpretation, said in a news release.

King’s Quest, designed by Sierra On-Line co-founder Roberta Williams, was honored for its continuing influence on adventure games since introducing players to the fantastical world of Daventry in 1984.

“More than any other game of its type, King’s Quest established or reinforced many of the conventions of the adventure games that followed it,” World Video Game Hall of Fame archivist Julia Novakovic. “Many games still today can trace their lineage back to King’s Quest.”

Seven sequels followed from Sierra On-Line, which Williams ran with her husband, Ken.

Bejeweled, created as a web-based Flash game in 2001, is the first mobile game to be added to the 6-year-old World Video Game Hall of Fame, recognized for popularizing the “match three” puzzle game. The game’s developer estimated in 2013 that it had been downloaded more than 500 million times.

“Players from around the world have devoted tens of billions of hours to playing Bejeweled and the games that it inspired. Now, Bejeweled and its successor puzzle games seem commonplace—a regular part of all our lives,” curator Shannon Symonds said.

The building game Minecraft has found its way onto devices around the world and into schools since 2009, letting players build elaborate structures out of pixilated blocks they mine.

Students have honed STEM (science, technology, engineering, and mathematics) skills replicating their entire schools in the game. By last year, it had sold more than 176 million copies across all platforms.

“The success of Minecraft speaks to the maturing of video games as a cultural touchstone,” digital games curator Andrew Borman said.

“No longer do game creators need to be obsessed about having the most realistic looking graphics. …. Minecraft came of age at a time when indie gaming had emerged to give individual developers a greater say in the games they developed, and no game is a better representative of this movement than this bestselling hit creation.”

The World Video Game Hall of Fame is located at The Strong museum, which also houses the National Toy Hall of Fame. The video hall recognizes electronic games of all types – arcade, console, computer, handheld, and mobile – that have had sustained popularity and influence on the industry or popular culture.

Anyone can nominate a game. The final selections are made on the advice of journalists, scholars, and others familiar with the history of video games and their role in society.

TOPICS: Bejeweled, Games, hall of fame, Mincecraft, World Video Game Hall of Fame
Read Next
WATCH: Wombat, koala become best friends after sharing enclosure at zoo
EDITORS' PICK
Garcia softens stance, meets IATF halfway on swab-upon-arrival policy
Want to help local farmers? Shop small and eat Real Food
ICC is everything but a court of ‘white people’
Manila is 78th most expensive city in the world for foreign workers
TeaM Energy pushes development programs to help in pandemic rebound
Piolo Pascual: The Ultimate Heartthrob continues to level up
MOST READ
Sharon Cuneta on living in the US: ‘Nagagawa ko lahat ng normal na bagay’
Mike Nieto asks fans: ‘No below the belt remarks’ toward South Korea
Duterte-Duterte tandem possible but ‘winnability is another question’ — Binay
ICC is everything but a court of ‘white people’
Don't miss out on the latest news and information.