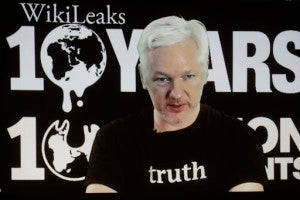 In this Oct. 4, 2016 file photo, WikiLeaks founder Julian Assange participates via video link at a news conference marking the 10th anniversary of the secrecy-spilling group in Berlin, Germany. AP

WASHINGTON — WikiLeaks founder Julian Assange sought to recruit hackers at conferences in Europe and Asia to provide his anti-secrecy website with classified information, including military secrets, according to a new Justice Department indictment announced Wednesday.

The superseding indictment does not contain additional charges beyond the 18 counts the Justice Department unsealed last year. But prosecutors say it underscores Assange’s efforts to procure and release classified information, allegations that form the basis of criminal charges he already faces.

Assange was arrested last year after being evicted from the Ecuadorian Embassy in London and is at the center of an ongoing extradition tussle over whether he should be sent to the United States.

The Justice Department last year charged him with conspiring with former U.S. Army intelligence analyst Chelsea Manning in one of the largest compromises of classified information in U.S. history. It says the WikiLeaks founder damaged national security by publishing hundreds of thousands of classified documents, including diplomatic cables and military files on the wars in Iraq and Afgahnistan, that harmed the U.S. and its allies and aided its adversaries.

Assange maintains he was acting as a journalist entitled to First Amendment protection. His lawyers have argued the U.S. charges of espionage and computer misuse were politically motivated and an abuse of power.

The allegations in the new indictment center on conferences in 2009 in the Netherlands and Malaysia at which prosecutors say he and a WikiLeaks associate sought to recruit hackers who could locate classified information, including material on a “Most Wanted Leaks” list posted on WikiLeaks’ website.

According to the new indictment, he told would-be recruits that unless they were a member of the U.S. military, they faced no legal liability for their actions.

At one conference in Malaysia, called the “Hack in the Box Security Conference,” Assange told the audience, “I was a famous teenage hacker in Australia, and I’ve been reading generals’ emails since I was 17.”

A lawyer for Assange, Barry Pollack, said he wanted to review the indictment before commenting.