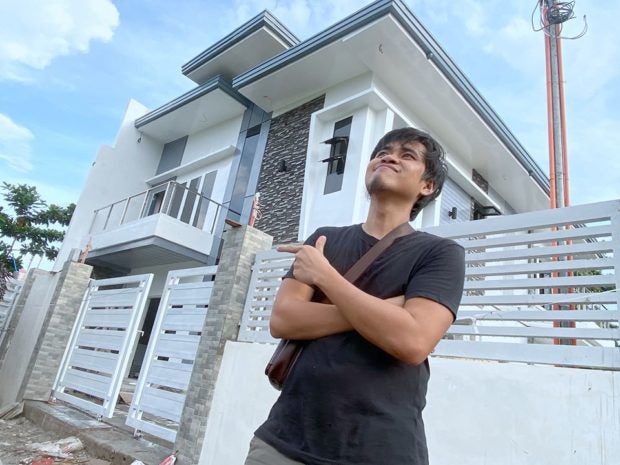 After years of gaming, Edgar Dumali, known as streamer ChooxTV, has finally been able to put up his dream home in South Cotabato.

Dumali has about 5.4 million followers by playing Mobile Legends and livestreaming his games on Facebook. He has put the earnings from three years of streaming into a new home, as Dumali has shown in his vlogs.

With the house still in progress, he proudly shared the exterior and interior designs of the two-storey home on YouTube on June 27. The house has four bedrooms, one of which will be a gaming room.

Dumali spoke about his hardships in an episode of news show “Kapuso Mo, Jessica Soho” which aired yesterday, July 5. He recalled that in his childhood, he moved from one place to another because his father worked various jobs.

“May mga panahong minsan kinakain namin mga kamote na lang,” he recalled in the show. (There were times where we only ate sweet potatoes.)

When he grew older, he also had to take on odd jobs to make ends meet. However, he found himself more motivated when he met his partner Angel in Zamboanga.

The couple has been raising their kids together, but there was a point when Dumali neglected time with his family because of gaming. At that time, Angel decided to take the kids and leave him. Dumali has since strived to put more balance between gaming and his family.

(If there is good that comes from streaming, there is also bad when it is too much. So this needs to be limited, let us control it.)

The streamer marked his achievement yesterday, July 5 with a video on Facebook comparing where he used to live with the home he has today.

He gave encouragement to followers too: “Kung nagawa ko, magagawa [n’yo] din.” (If I could do it, you can too.) JB