Man finds caterpillars in broccoli, raises them to become butterflies 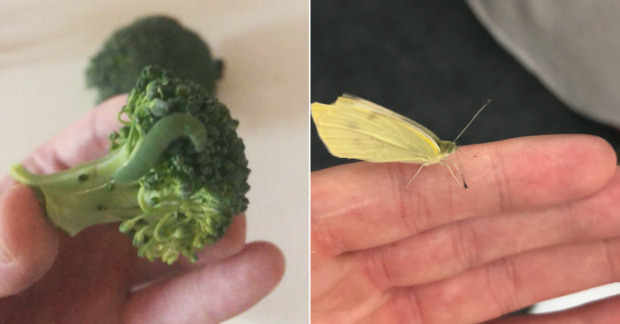 While finding insects in one’s food could cause panic in some, one man from the United Kingdom welcomed the critters in his store-bought vegetables.

Sam Darlaston, a radio jock and TV host in London, revealed on Twitter last June 11 that broccoli he purchased from the grocery Tesco had one caterpillar.

Darlaston decided to keep the caterpillar because he was not sure if it would survive outdoors, he told Insider in an interview on July 2.

He did his research to make sure that the species was common in the U.K. and found out that it was a cabbage white. He then consulted wikiHow to find out how he could care for his new pet, which he named Cedric and placed in a plastic container.

After getting a refund from the grocery for his broccoli, he bought another bag, only to find five more caterpillars. His roommate found another caterpillar in a separate bag of broccoli, bringing the total to seven caterpillars in his home.

Each of the new caterpillars also received names — one was fittingly called Broc and another Olly, while the others were Janine, Croc, Carlos and Slim Eric.

Darlaston also gave the broccoli to the caterpillars for their consumption, though Slim Eric preferred to munch on his vanilla incense sticks.

In the weeks that followed, Darlaston updated his Twitter thread with the growth of the caterpillars as they molted into a chrysalis. Six out of the seven were in the chrysalis stage by June 22.

Final update of the day… we’ve now got 3 cocoon / chrysalis, they grow up so fast 😭🐛 pic.twitter.com/AZIJMvOYnI

Raising the caterpillars were as much a benefit to them as it was for Darlaston.

“All of a sudden we had these things wiggling around and we just became really obsessed with them,” Darlaston told Insider.

“We named them, we’d get them out and let them walk around. This is lockdown, you gotta do what you can to keep occupied!”

Eventually, he also posted pictures of them transforming into butterflies. The first caterpillar he found, Cedric, spread its wings on June 23.

Darlaston also took it upon himself to release them outdoors and bid them goodbye.

“It was quite sad!” Darlaston said of his “caterpillar children” flying the coop. “But I’m just happy now that they’ve all survived it. It was 18 days, and I wanna do it all again.”

Darlaston intends to write a children’s book about his experience with the seven caterpillars and use the profits for wildlife sanctuaries. Niña V. Guno/JB

Death of cat, hailed among oldest in the world at 31, confirmed by owner

Insect-loving guy confesses he ‘dated’ a cockroach, ate it when it died