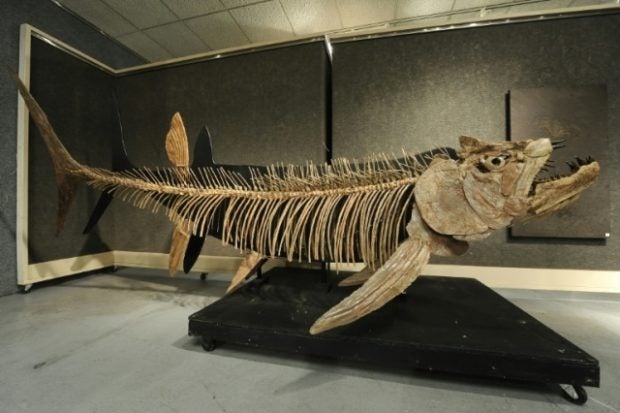 The fossilized remains of this Xiphactinus — similar to the one found in Argentina — was discovered in the U.S. state of Kansas and sold at auction in 2010. Image: Robyn Beck – AFP

A giant 70-million-year-old fossil of a fish that lived among dinosaurs has been discovered in Argentine Patagonia, a team of researchers said on Monday, July 6.

Argentine paleontologists “found the remains of a predator fish that was more than six meters long,” the researchers said in a statement.

The discovery was published in the scientific journal Alcheringa: An Australasian Journal of Palaeontology.

The fish “swam in the Patagonian seas at the end of the Cretaceous Period, when the temperature there was much more temperate than now,” the statement said.

“The fossils of this carnivorous animal with sharp teeth and scary appearance were found close to the Colhue Huapial lake” around 1,400 kilometers south of the capital Buenos Aires.

This fossil belonged to the Xiphactinus genus, “amongst the largest predatory fish that existed in the history of Earth.”

“Its body was notably slim and ended in a huge head with big jaws and teeth as sharp as needles, several centimeters long.”

Examples of this species have been found in other parts of the world, “some of which even have preserved stomach contents,” said Julieta de Pasqua, one of the study authors.

Previously, the Xiphactinus had only been found in the northern hemisphere, although one example was recently found in Venezuela.

Patagonia is one of the most important reservoirs of fossils of dinosaurs and prehistoric species. NVG

‘Burado’ gets the axe due to COVID-19 pandemic