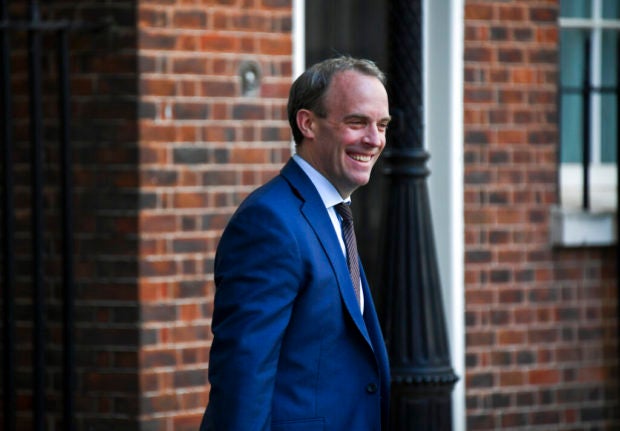 LONDON — The British government accused “Russian actors” Thursday of seeking to interfere in the U.K.’s last general election, and a powerful committee of lawmakers confirmed it would publish within days a long-awaited report into previous allegations of interference from Moscow.

British Foreign Secretary Dominic Raab said in a written statement to lawmakers that it is “almost certain” that the unnamed individuals “sought to interfere” in the December 2019 election by amplifying online “illicitly acquired and leaked government documents.” Raab also said there was an “ongoing criminal investigation” into how the documents were obtained.

The documents, relating to U.K.-U.S. trade talks, were used by the then-leader of the main opposition Labour Party, Jeremy Corbyn, to back up his claims that the Conservative government was preparing to “sell off” the National Health Service.

The papers were believed to have appeared online some months earlier but gained little traction until picked up by the Labour campaign and highlighted at a news conference in November. After they were revealed, online discussion site Reddit said its own investigation linked their appearance to a previous Russian disinformation campaign.

“On the one hand, there is no proof, on the other, some possible retaliatory measures are mentioned,” Zakharova said at her weekly media briefing. “These are mutually exclusive things.”

The U.K. also joined the United States and Canada on Thursday in accusing Russia of trying to steal information from researchers seeking a coronavirus vaccine. Russia rejected these accusations.

Raab’s statement on the alleged election interference came as the newly installed Intelligence and Security Committee in Parliament said it would release the report on previous allegations of Russian interference before Parliament’s summer break starts next week. The committee has a wide-ranging and largely secretive role overseeing the U.K.’s intelligence and security services.

It was unable to publish the report since it was compiled last year after Conservative Prime Minister Boris Johnson refused to clear it for release ahead of the December election. The report needs government approval before it can be made public.

Johnson has been dogged by questions about the unpublished report for months, especially over what it says about any Russian involvement in the 2016 Brexit campaign, which saw Britain vote to leave the European Union.

The Labour Party has accused the government of failing to publish the report because it would lead to other questions about links between Russia and the Brexit campaign, which was spearheaded by Johnson.

The decision to publish the report came a day after the Intelligence and Security Committee for the current parliamentary term was formed. The committee’s first action was to reject the government’s preferred candidate to lead it.

The nine-member committee elected lawmaker Julian Lewis as chairman. The job had been expected to go to a former minister, Chris Grayling, who is a loyal supporter of Johnson.

A political storm ensued and Lewis was kicked out of the party’s caucus in Parliament. Lewis said the decision to strip him of his Conservative status was “strange” given that the committee is meant to be outside the influence of government.