How new inventions can fight spread of COVID-19 indoors 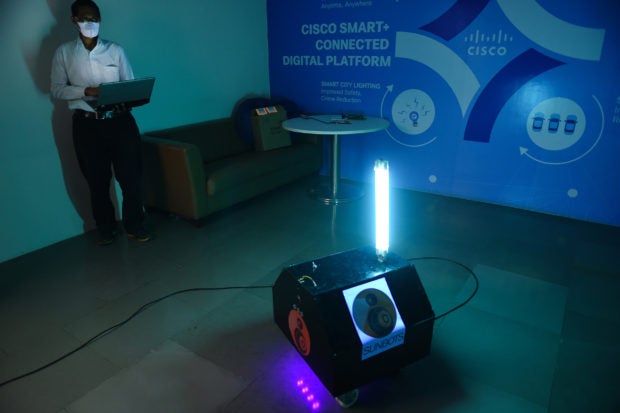 It’s become a familiar mantra: masks, hand-washing and physical distancing can slow the spread of the coronavirus while work continues on developing the vaccines and treatments needed to rid the world of its threat.

But as tens of millions of people return to public transit, their workplaces and schools, are these interventions enough?

Researchers are increasingly looking at the pandemic through the lens of engineering, devising ways to make indoor environments safer. Here’s a preview of what’s in store.

Scientists are getting more worried about the potential airborne spread of the coronavirus, at distances far greater than the two meters (six feet) of spacing urged by guidelines.

Certain super-spreading events, such as a choir practice in Washington state in the spring, appeared to involve so-called microdroplets that become suspended in the air.

HEPA (high-efficiency particulate air) filters — technology that first came to market in the 1950s — are used widely in hospitals, biocontainment labs and airplanes. These use a fan to draw air through felt-like filters to capture the tiniest of microbes.

But the filters become contaminated over time and must eventually be incinerated or autoclaved.

A research team at the Texas Center for Superconductivity at the University of Houston and Galveston National Laboratory has now demonstrated the efficiency of a new type of filter based on an ultra-fine foam made of nickel.

By heating the foam to 200 degrees Celsius (392 degrees Fahrenheit), the researchers were able to eliminate 99.8% of airborne SARS-CoV-2 virus from a room on the first pass.

Crucially, the foam is insulated, so it doesn’t heat up the room.

The team published their findings in the journal Materials Today Physics last week, and Medistar — the company behind it — has received regulatory approval to sell the system.

The firm says the system can either be installed in pre-existing air conditioning units or walked through a room in a mobile unit.

“This is a very timely invention with great potential in fighting against COVID-19, particularly with increasing consensus that COVID-19 can be airborne,” Gang Chen, a Massachusetts Institute of Technology (MIT) professor who was not involved in the work, told Agence France-Presse.

But since COVID-19 carriers may stay in a room for a prolonged period, the key to how useful any filtration system is lies in how fast it can exchange air at high volume.

Lamps that operate on a particular area of the ultraviolet spectrum known as UVC have long been used to kill bacteria, viruses and molds, notably in hospitals and in the food-processing industry.

But direct exposure to UVC is dangerous because the rays, which aren’t present in regular sunlight, cause skin cancer and eye problems — meaning they can only be used once people leave.

Researchers at Columbia University have been working for several years on a new type of UVC lamp, whose shorter wavelength of 222 nanometers makes them safe for humans but still lethal to microbes.

Last month, a team led by physicist David Brenner published a paper in the journal Scientific Reports showing that their technology killed 99.9% of seasonal coronaviruses present in airborne droplets.

Japanese company Ushio has already started selling far-UVC lamps in the U.S. but says on its website that ongoing studies on their safety will decide when they are ready for occupied spaces.

Catching the virus via touch is also a potential risk, hence the directives to frequently wash our hands and use disinfectant on surfaces.

Researchers at the University of Arizona recently proposed widespread use of coatings as a new line of defense against SARS-CoV-2.

An antiviral coating made of quaternary ammonium polymer, developed by Allied BioScience, was found to reduce the amount of a coronavirus closely related to SARS-CoV-2 on a surface by 90% in 10 minutes.

It does this by “denaturing” the virus’s proteins — effectively twisting them out of shape — and attacking its protective layer of fat.

The colorless substance is sprayed on surfaces and has to be reapplied every three to four months.

“It’s not a substitute for regular cleaning and disinfecting, but it covers you in between regular disinfecting and cleaning,” microbiologist Charles Gerba, who led the study, which has not been peer reviewed, told AFP.

The Centers for Disease Control and Prevention recently clarified, however, that surface transmission probably isn’t the main way the virus is spread, as some had previously thought. CL