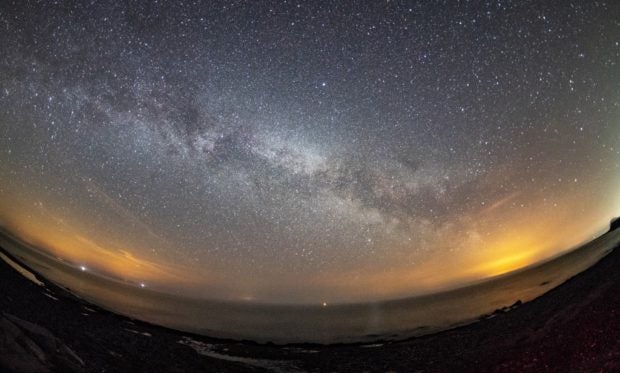 FILE PHOTO — The milky way and meteors of the April Lyrids annual meteor shower are seen in the night sky over Burg auf Fehmarn on the Baltic Sea island of Fehmarn, northern Germany, on April 20, 2018. (Photo by Daniel Reinhardt / dpa / AFP)

A giant meteor shower bombarded Earth and the Moon 800 million years ago with more than 30 times the force of the asteroid strike that killed the dinosaurs, new research showed Tuesday.

Japanese scientists examined images taken by the Kaguya lunar orbiter and found that an enormous asteroid — at least 100 kilometers (60 miles) in diameter — broke up and plunged into the Earth-Moon System, having a profound impact on life on our planet.

The probability of an asteroid that size hitting Earth is roughly once in 100 million years, and impact craters of meteor strikes created before 600 million years ago have been erased by aeons of erosion and other geological processes.

But there is virtually no erosion on the Moon, allowing the team to reconstruct the history of nearly 60 large craters.

Researchers from Osaka University looked at the age the large craters were formed by examining the density of smaller craters within their ejecta range — where chunks of rocks would have landed after the main impact.

They used scaling laws and collision probabilities to calculate that the mass of meteors to strike Earth and the Moon was 40-50 million billion tonnes — that’s 30-60 times greater than the Chicxulub impact event.

This strike, approximately 65 million years ago in what is modern day Mexico, is thought to have led to a mass extinction of more than three quarters of life on Earth, including non-avian dinosaurs.

Writing in the journal Nature Communications, they said the knock-on effect to life on Earth must have been profound.

“Our new finding suggests that the flux of extraterrestrial elements might have influenced marine biogeochemical cycles… severe perturbations to Earth’s climate system, and the emergence of animals,” they said.

The Kaguya mission was launched in 2007 and studied Earth’s satellite in then-unprecedented detail, including the dark side of the Moon and its magnetic field.