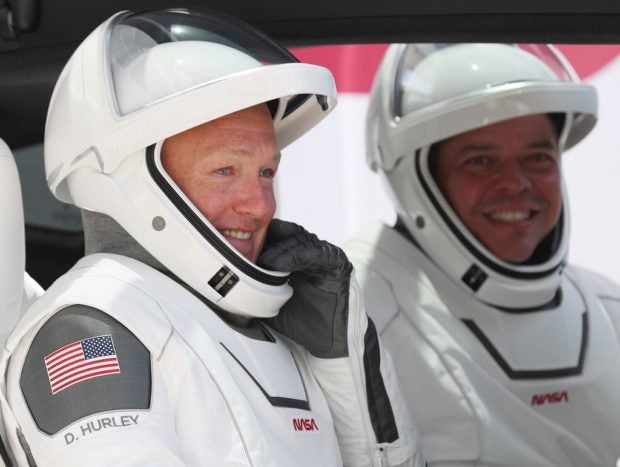 (FILES) In this file photo taken on May 30, 2020 NASA astronauts Bob Behnken (R) and Doug Hurley sit in a Tesla vehicle after walking out of the Operations and Checkout Building on their way to the SpaceX Falcon 9 rocket with the Crew Dragon spacecraft on launch pad 39A at the Kennedy Space Center in Cape Canaveral, Florida.  (Photo by JOE RAEDLE / GETTY IMAGES NORTH AMERICA / AFP)

The two NASA astronauts brought back to Earth on Sunday said they felt they were inside the belly of a beast as it careened into the atmosphere at 17,500 mph.

The thrusters were firing to keep the capsule, called “Endeavour,” pointed precisely at its target site off the coast of Pensacola, for the first water landing by a US spaceship since 1975.

“The atmosphere starts to make noise, you can hear that rumble outside the vehicle and as the vehicle tries to control, you feel a little bit of that shimmy in your body,” continued the 50-year-old.

“It doesn’t sound like a machine, it sounds like an animal coming through the atmosphere with all that all the puffs that are happening from the thrusters and the atmospheric noise,” he added.

Not only was ride down deafening, but each time the vessel carried out descent sequences like jettisoning its “trunk” that contained the power system and firing parachutes, it was also bone-jarring.

“Very much like getting hit in the back of the chair with a baseball bat, you know, just a crack,” said Behnken, describing the sensation.

Behnken and crewmate Doug Hurley, 53, are best friends in real life and both are married to fellow astronauts.

They were addressing journalists, as tradition dictates, two days after their return from a six-month stay on the International Space Station.

The success of the demonstration mission for SpaceX Crew Dragon, the first crewed US spaceship to achieve orbit since the Space Shuttle era, means it will likely soon be certified for regular service.

The next mission is already planned for September.

“The mission went just like the simulators, from start to finish, all the way there was really no surprises,” said Hurley.

Both men are veterans of the Space Shuttle program, which ended in 2011, and they had been training for five years with SpaceX.

Splash down at 15 miles per hour in the Gulf of Mexico felt “pretty firm,” said Hurley, but that was expected.

One person who will particularly benefit from Behnken’s knowledge: astronaut Megan McArthur, who is slated to make the same voyage in the spring of 2021 on the same spacecraft, and is Behnken’s wife.