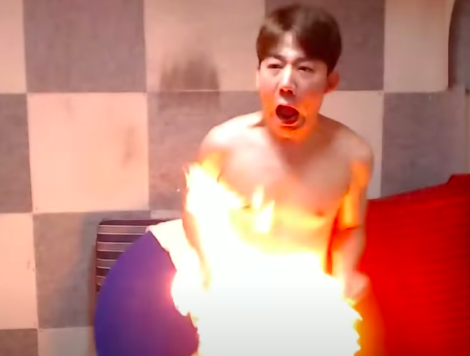 A South Korean YouTuber shocked fans—and even impressed some—as he fulfilled his end of quite a dangerous deal that resulted in his getting second-degree burns.

The deal was for him to set his private parts on fire for five seconds if he did not come in first place for a particular round—so he did.

At around the 3-hour-and-15-minute mark of the said livestream, which aired on YouTube on Aug. 6, viewers saw the gamer strip down to only his white shorts and pour lighter fluid all over his privates.

On his first attempt, the gamer set the lighter fluid on fire, causing him to scream and jump in pain. Unfortunately, the whole ordeal lasted for only around three seconds, falling a little short of the imposed penalty.

Tae Il then began pouring more lighter fluid on his crotch area, and reset his timer to properly accept the penalty.

On his second try, which was also the last, the gamer again fell short of the required five seconds, but for completely understandable reasons.

Viewers saw Tae Il scream in pain once again after his crotch area was enveloped by a relatively larger fire, which also burned some of the hairs on his stomach.

Tae Il, who was visibly in agony, spent quite some time sitting on the floor, off-camera, after fulfilling his viewers’ request. He then sat down on his chair while holding to his body what appears to be a cold compress before he ended the livestream.

A lot of his viewers, of course, were shocked that the Youtuber actually did the dangerous dare. Some, however, were reportedly impressed, with one even saying, “Tae Il kept his end of the deal. Can’t believe he did it.”

The YouTuber eventually updated his fans through social media that he has since gone to the hospital for treatment and revealed that he actually suffered from second-degree burns, according to the report.

YouTuber or not, however, people should not try this for themselves as they may end up with the said gamer’s injuries, or even worse. Ian Biong /ra