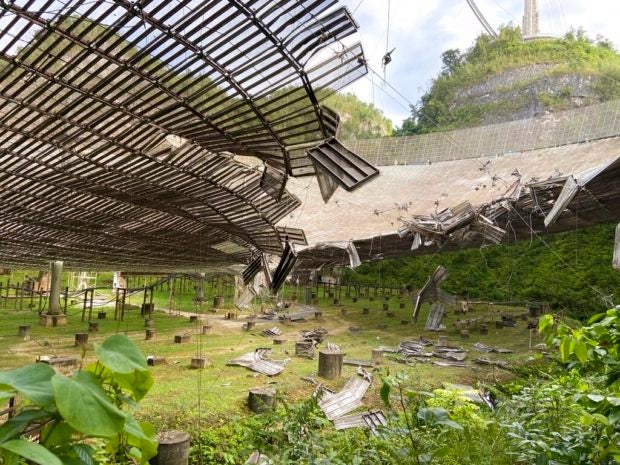 This photo shows the damage done by a broken cable that supported a metal platform, creating a 100-foot (30-meter) gash to the radio telescope’s reflector dish in Arecibo, Puerto Rico. (Arecibo Observatory via AP)

The University of Central Florida, which manages the National Science Foundation facility, said in a statement that a cable that helps support a metal platform broke and caused a 100-foot (30-meter) gash on a reflector dish. The university said eight panels in the dome also were damaged and the platform used to access the dome is now twisted.

The statement said it was unclear why the cable broke. The cost of the damage wasn’t immediately known.

Scientists worldwide use the telescope to detect radio emissions emitted by objects such as stars and galaxies. It was featured in the Jodie Foster film “Contact” and the James Bond movie “GoldenEye.”