Two beluga whales from a Shanghai aquarium have returned to the sea in an Icelandic sanctuary, conservationists said Monday, expressing hopes of creating a model for rehoming some 300 belugas currently in captivity.

Little White and Little Grey, two 13-year-old females, left behind their previous lives entertaining visitors at the Changfeng Ocean World in June 2019 when they were flown to Iceland’s Klettsvik Bay in the Westman Islands, in specially tailored containers. 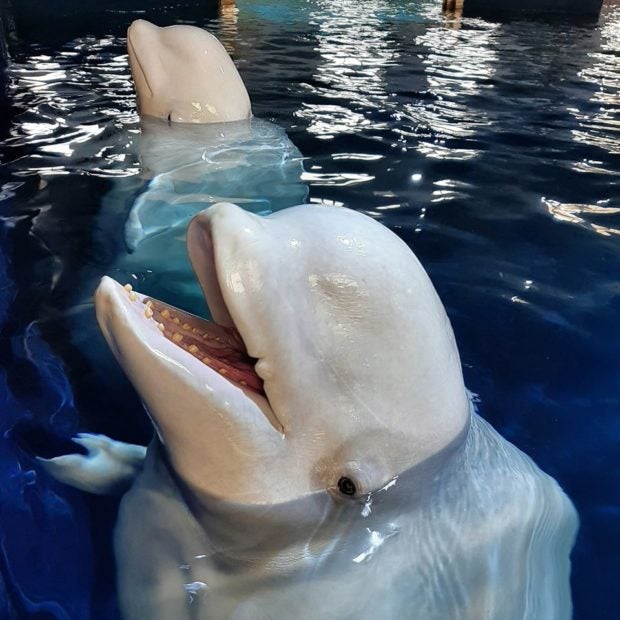 On Friday, they were moved from their landbased facility to care pools in the sea at Klettsvik Bay — the first time the two belugas have been in the sea since they were taken from a Russian whale research center in 2011, the conservation charity Sea Life Trust said in a statement on Monday.

They will stay in the care pools “for a few weeks” before they are released into the bigger sanctuary, a 32,000-square-meter (344,445-square-foot) sea pen that will become their home, organizers said.

Little Grey and Little White “will need a short period of time to acclimatize to their new natural environment and all the outdoor elements before they are released into the wider sanctuary in Klettsvik Bay,” the statement said.

After having been cared for by humans for so many years, it is unlikely the belugas would survive in the wild.

The pen is thus sealed off by nets that still allow sea life, such as fish, to swim through.

Andy Bool, the head of Sea Life Trust, said the belugas’ release “was as smooth as we had hoped and planned for.”

“We are carefully monitoring Little Grey and Little White with our expert care team and veterinarians,” he said.

Bool said the whales were “ambassadors for the 300 other belugas that are in human care across the world.”

“We hope to show that Little White and Little Grey thrive in this bay, and we’re conducting a research study … that will hopefully show that there’s a welfare benefit to being in a natural environment like this.

“We hope that can then persuade others that maybe their beluga whales might be better off in a different environment,” Bool said.

Ahead of their sea transfer, the whales were trained to hold their breath longer, become physically stronger to cope with tides and currents, and put on blubber to help them cope with colder water temperatures.

Originally from Russian Arctic waters, it is thought they were 2 or 3 years old when captured.

Belugas typically live for 40 to 60 years.

Klettsvik is also where Keiko, the killer whale in the 1993 film “Free Willy”, was flown in 1998. The orca was fully released in 2002 but did not manage to adapt to life in the wild and died 18 months later in a Norwegian fjord. NVG