Masks on the street but not at work? Experts urge consistency | Inquirer Technology
Close
menu
search

Masks on the street but not at work? Experts urge consistency 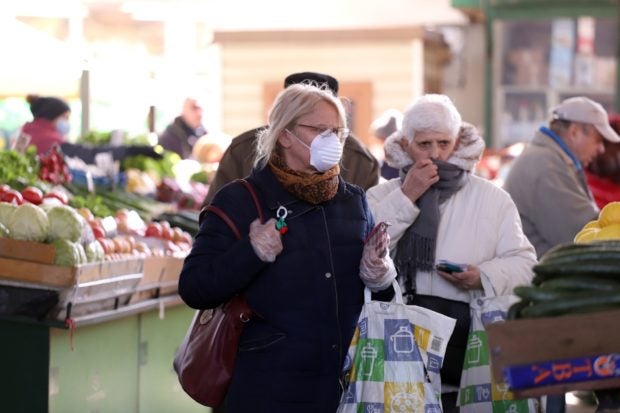 In France, dozens of towns and cities — including Paris — have made face coverings mandatory in markets and busy streets. Image: Radila Radilova/Istock.com via AFP Relaxnews

Faced with an upsurge in coronavirus cases and alarm over images of summer crowds packing onto streets and beaches, some European governments have mandated masks even in open-air public places.

But with many virus clusters sprouting behind closed doors in offices and other workplaces where face-covering rules are less clear, experts have questioned if policies are focusing on the wrong target.

In recent days several European countries have toughened their advice on masks, with France and Belgium widening their regulations to include certain outdoor settings.

Brussels residents are now required to wear masks in all public spaces, and all spaces to which the public has access.

In France, dozens of towns and cities — including Paris — have made face coverings mandatory in markets and busy streets.

The country’s Ministry of Health has said it was a “gesture of common sense” to wear one in crowded public places, while the head of France’s science council, Jean-Francois Delfraissy, has said they should be “essential” on packed streets and at seaside resorts.

However, with little evidence that there is a high risk of transmission in outdoor settings, some experts have questioned whether the measures are misplaced.

“Outside, there is such a mixing of air that you do not have a sufficient viral concentration to be infectious,” said Martin Blachier, of the consulting company Public Health Expertise.

He called the measure a “psychological gamble” that could push people to gather indoors, where he said the risk of contamination is far higher.

Blachier said the focus should instead be on companies, where the current advice is “obsolete” because it is based on social distancing, without taking into account new research suggesting the virus can linger in the air for several hours.

The World Health Organization (WHO) said in early July that it was reviewing emerging evidence of airborne transmission, after an international group of scientists concluded the virus could travel far beyond two meters (6.5 feet) — the measurement recommended in physical distancing guidelines.

Its announcement was part of a transformation in official assessments of the utility of masks in slowing the spread of the virus.

Initially, authorities, including the WHO, were unconvinced of the effectiveness of face coverings and wary of encouraging the public to use them when health workers were chronically short of protection.

Early in the pandemic, it was considered unlikely that COVID-19 could be transmitted by microdroplets expelled by people when they speak and breathe.

But scientific opinion has since shifted and, along with increased understanding of asymptomatic and pre-symptomatic spread, this has strengthened the argument for universal mask-wearing.

But offices are often given less stringent guidelines.

KK Cheng, who runs the Institute of Applied Health Research at Britain’s University of Birmingham, said there was “no rational explanation” for why masks were compulsory in shops but not in most workplaces.

He raised particular concerns over environments like call centers, where there are “large numbers of people all speaking quite loudly together”.

“If you have a large number of people working in an office like that then you are just inviting trouble,” he added.

A study published this month by the United States Centers for Disease Control described a contagion cluster of 97 people, mostly workers at a call center in the South Korean capital Seoul.

Of the 216 employees in the 11th-floor office, 94 people tested positive — an attack rate of 43.5% — and most of those infected worked on the same side of the building, researchers said.

According to France’s Ministry of Health, 49% of the virus clusters recorded are “in the workplace,” including in hospitals.

Health expert Eric Caumes, head of the infectious diseases department at the Pitie Salpetriere hospital in Paris, said around 20% of these groups of infections were in companies.

He called for firms where possible to continue to allow staff to work at home after the school holidays.

“We will have to continue to work from home, to organize ourselves differently to avoid multiplying clusters in private companies,” he told Franceinfo radio on Thursday.

France has mandated face coverings in enclosed public spaces since late July but left guidance on offices more at the discretion of employers.

This was criticized in an open letter by a group of medical experts published in the newspaper Liberation on Friday, who compared the virus accumulating in the air of enclosed rooms to “cigarette smoke.”

“And the more the virus accumulates in the air — either because of a long exposure time or because of a large number of excretors — the more we risk contamination,” they said.

They called for the government to make masks compulsory in all confined spaces, offices and classrooms and to “unambiguously encourage” remote working.

KK Cheng acknowledged that the face coverings could be uncomfortable and very hard for some people to wear.

But he said it was a necessary measure to help slow the virus, which has infected more than 20 million people and killed more than 750,000 globally since emerging late last year.

“It’s so serious that I think that the discomfort of wearing a mask is something worth bearing,” he said.

Heat up your rice cooker and clean your masks!

Patient who recovered from coronavirus wishes she wore face mask