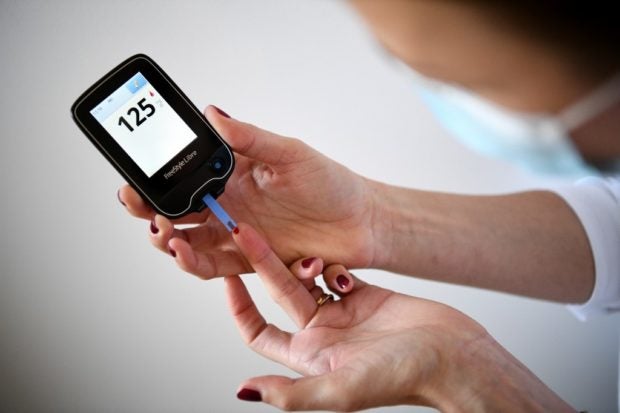 FILE — A woman with diabetes uses a glucometer to measure the glycemia in her blood in Paris on March 24, 2020, on the eighth day of a strict lockdown in France aimed at curbing the spread of COVID-19 caused by the novel coronavirus. (Photo by FRANCK FIFE / AFP)

A new technique that grows insulin-producing cells and can protect them from immune attack after they are transplanted may offer new hope for treating some people with diabetes.

In type-1 diabetes, the body turns on itself and attacks the so-called beta cells inside clusters in the pancreas called “islets.”

These beta cells are responsible for gauging sugar levels in the blood and releasing insulin to keep them stable. Without them, diabetics must rely on insulin injections or pumps.

One treatment devised to end that reliance involves transplanting donor islets into diabetics, but the process is complicated by several obstacles, including a shortage of donors.

Islets also often fail to connect with blood supply, and even when they do, like other transplants, they can come under attack by the recipient’s immune system, which views the cells as invaders.

As a result, patients have to take drugs that suppress their immune systems, protecting their transplant but potentially exposing the rest of their body to illness.

In a bid to overcome some of these challenges, a team looked to find another source for islets, by coaxing induced pluripotent stem cells (iPS) to produce what the team called HILOs, or human islet-like organoids.

These HILOs, when grown in a 3D environment mimicking the pancreas and then turbocharged with a “genetic switch,” successfully produced insulin and were able to regulate blood glucose when transplanted into diabetic mice.

“In the past, this functionality was only achieved after a month-long maturation in a living animal,” said Ronald Evans, director of the Gene Expression Lab at the Salk Institute for Biological Studies.

“This breakthrough allows for the production of functional HILOs which are active on the first day of transplantation, placing us closer to clinical applications,” Evans, who led the study, told AFP.

Having found a potential way to solve the supply chain problem, the scientists then sought to tackle the issue of immune rejection.

They focused on something called PD-L1, a so-called checkpoint protein that is known to inhibit the body’s immune response.

The team effectively reversed that process, and induced the HILOs to express the protein in a bid to outwit the immune system.

“Normally, human cells placed in a mouse would be eliminated within a day or two,” said Evans.

“We discovered a way to create an immune shield that makes human cells invisible to the immune system.”

While HILOs transplanted into mice without the PD-L1 protection gradually stopped functioning, those induced to express the protein were shielded and continued to help diabetic mice regulate their blood glucose for more than 50 days.

Being able to grow insulin-producing cells and protect them from attack “brings us much closer to having a potential therapy for type-1 diabetic patients,” Evans said.

Around 422 million people worldwide were living with diabetes by 2014, according to the World Health Organization, a figure that includes both type-1 and type-2 diabetes.

Islet transplantation is generally considered as a treatment for type-1 diabetics, whose disease is the result of an auto-immune response.

Evans cautioned that the research, already a decade in the making, was still years from being able to treat diabetes in humans.

“To advance HILOs into the clinic, we need to confirm that they work in other animal models, including primates, as well as do longer-term studies in mice,” he said.

He hopes that human studies of the technique will be possible in two to five years.

“This is a hard-to-manage disease and insulin is not a cure,” he added, noting that 1.6 million children and teenagers are living with type-1 diabetes in the United States alone.

“Good science is not just a discovery — it can enrich the world and give hope to those who live with disease.”