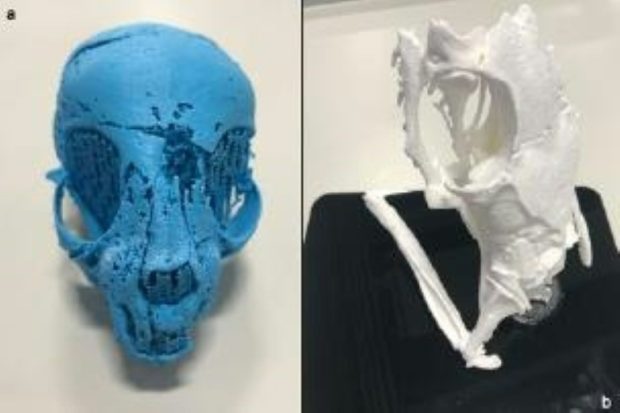 Scientists in Swansea have used 3D imaging to work out how this mummified Ancient Egyptian cat (left) and snake (right) both died. Image: AFP/Swansea University/Richard Johnston

Scientists have used 3D imaging to examine the contents of three mummified animals – a cat, a snake and a bird of prey – to provide unprecedented insight into how they died, all without damaging the specimens.

Ancient Egyptians frequently preserved domesticated animals alongside humans in burial chambers to help bridge the gap between the realms of the living and the dead.

Animal sacrifice and mummification was so widespread that an entire network of farms and transport infrastructure was required to keep up with the demand.

Numerous specimens are held in museums around the world today, but their contents have until now been hard to divine without damaging the mummies. 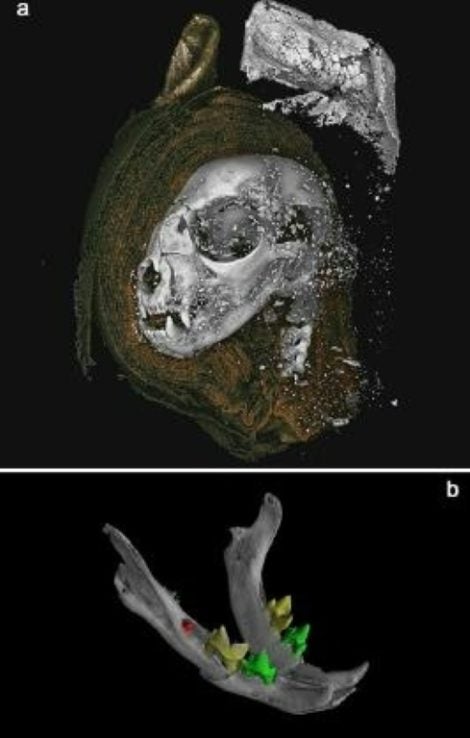 The first, a house cat no more than five months old, was found to have been strangled — as evidenced by separated vertebrae.

“Every day when we X-ray something in the lab we know we could be the first people to see the inside in that way,” said Rich Johnston, co-Director of Swansea’s Advanced Imaging of Materials Facility.

“But with animal mummies it provides a glimpse into the distant past, like a time capsule,” he told AFP.

The second specimen was a small bird of prey, whose cause of death proved inconclusive.

But it was the third mummy that really captivated the team. From the outside, the egg-shaped object appears to be non-descript and could contain just about anything.

When the team conducted 3D scans of it however, they saw it contained juvenile Egyptian cobra.

More astonishingly, they observed that it had been buried with its mouth forced open in accordance with an ancient Egyptian burial rite.

“Opening of the mouth allowed statues of deities and the dead to regain their senses, to see thereby into the realm of the living,” said Carolyn Graves-Brown, co-author of the study released Thursday in Nature Scientific Reports.

A number of snake-gods appear in Egyptian mythology and the reptiles were associated with rebirth — most likely due to their ability to shed their skin.

“They also are associated with the earth, and with fire and protection, as well as danger,” Graves-Brown said.

The team said they hoped their technique could be used to get ancient artifacts to disclose their secrets.

“Only with the higher resolution imaging did we find evidence of how the snake may have been treated while alive, or that snakes may undergo ritual processes during mummification,” said Johnson.

“That hasn’t been seen before.” IB