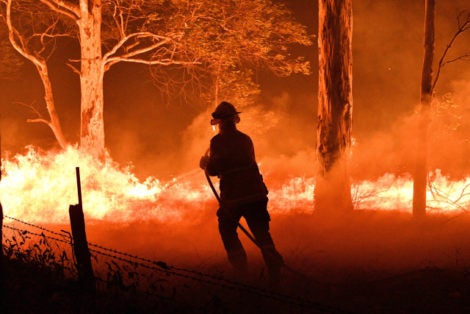 The study examined 15 extreme weather events that occurred around the US between March 2012 and June 2017. The events included flooding, winter weather, extreme heat, tornadoes, wildfires and a landslide. Image: AFP/Saeed Khan

The degree to which policies are changed in response to natural disasters depends on a combination of factors, notably the number of fatalities and the extent of media coverage, according to an American study published in the Policy Sciences journal last Aug. 28.

Climatologists predict that the frequency and severity of extreme weather events will inevitably increase over the next few decades. Researchers at Oregon State University (OSU) set out to understand how local communities are currently responding to these phenomena.

“Local communities are typically the first to respond to extreme events and disasters. How are they making themselves more resilient — for example, how are they adapting to more frequent flooding or intense heat?” wondered the researchers who authored the study.

Conducted in collaboration with a researcher from Harvard University, the study examined 15 extreme weather events that occurred around the United States between March 2012 and June 2017. The events included flooding, winter weather, extreme heat, tornadoes, wildfires and a landslide.

In both cases, policy changes were relatively modest, but authorities were relatively quick to respond with measures such as the construction of firebreaks, dikes or community tornado shelters. The other two factors include the unusualness of the event and the political makeup of the community.

“As opposed to being driven by ideology or a shift in thought process, it’s more a means to an end,” pointed out Leanne Giordono, a post-doctoral researcher in OSU’s College of Public Health and Human Sciences, who supervised the study.

In their sample, the researchers did not find any instances where the response involved the adoption of long-term policies focused on prevention, such as communities passing laws to limit carbon emissions or require a shift to solar power.

“In some ways, it’s not surprising that you see communities that have these really devastating events responding to them. What about the vast majority of communities that don’t experience a high-impact event — is there a way to also spark interest in those communities? We don’t want people to have to experience these types of disasters to make changes,” said the authors of the study, who called for the adoption of climate policies that are more oriented towards greater prevention. CC