Once seen as loners, male elephants shown to follow elders 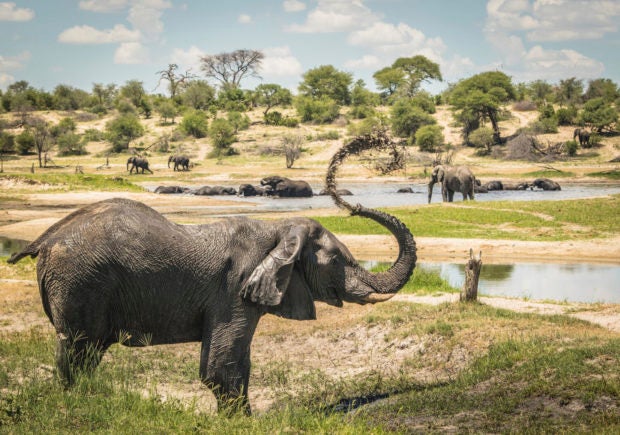 Male African elephants congregate along hotspots of social activity on the Boteti River in Botswana. Image: Connie Allen via AP

WASHINGTON — A line of elephants trundles across a dusty landscape in northern Botswana, ears flapping and trunks occasionally brushing the ground. As they pass a motion-activated camera hidden in low shrubbery, photos record the presence of each elephant.

What’s special about this group? It’s only males.

Female elephants are known to form tight family groups led by experienced matriarchs. Males were long assumed to be loners, because they leave their mother’s herd when they reach 10 to 20 years of age.

A new study shows that teenage males aren’t anti-social after all. Younger male elephants were seen tagging along behind older males as they travel from place to place. It’s more evidence in an emerging body of research that shows older males — like their female counterparts — play an important role in elephants’ complex society.

For the study published Thursday in the journal Scientific Reports, researchers analyzed photos of 1,264 sightings of male African savannah elephants traveling toward the Boteti River in 2017 and 2018. They found that younger males seldom traveled alone and older males most often led groups of mixed ages.

“Mature male elephants often take a position at the front of the line when they are leading the group” to streams or seasonal grazing grounds, said Diana Reiss, director of the Animal Behavior and Conservation Program at Hunter College, who was not involved in the new study.

“In human societies, grandparents are valued because they make really important contributions — helping with childcare and passing down knowledge gained over decades,” she said. “We’re now learning this pattern is also true for some other long-lived mammals, including dolphins, whales and elephants.”

This is the first such study of African savannah elephants. A 2019 paper used motion-activated cameras to describe similar male group dynamics among Asian elephants. 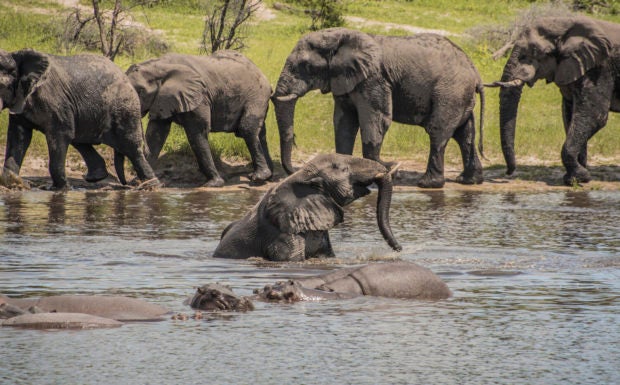 Scientists have long known more about breeding herds of female elephants, said Connie Allen, a biologist at the University of Exeter and a co-author of the new paper. “But males also have multifaceted social lives, and their groupings aren’t only shaped by kinship ties,” she said.

When several young orphaned male elephants were introduced into a park in Pilanesberg, South Africa, in the mid-1990s, the young males were extremely aggressive and killed 40 white rhinoceros. But their behavior was moderated after six older male elephants were added to the park.

“In some way, the older males created order, and all that pandemonium was quelled,” said Carl Safina, an ecologist at Stony Brook University, who was not involved in the new study. “We’re still learning about how male elephants acquire their cultural understanding of how to act, whom to defer to, and where resources like food and water sources are located.”

Because of their larger size and longer tusks, mature male elephants are most often targeted by poachers and legal trophy hunters in Africa.

But future conservation strategies should take into account the mentorship role that older males play, said Allen, the study co-author. “Males are more enigmatic. But it turns out they aren’t such loners,” she said. IB