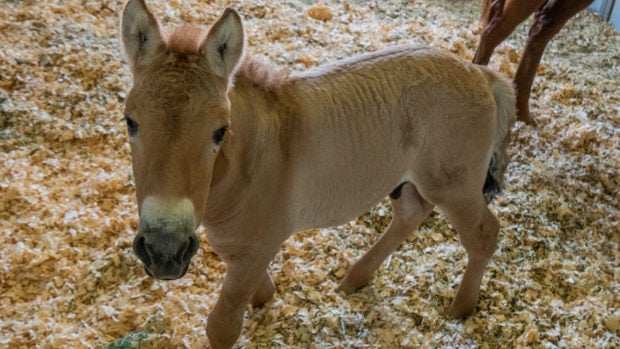 Kurt, the clone of a Przewalski’s horse stallion, in a photo taken on Aug. 28, 2020, at a Texas veterinary facility (Image: Scott Stine)

A foal said to be the first successfully cloned Przewalski’s horse was born in Texas in the United States in August.

The horse was born to a domestic surrogate mother on Aug. 6 and is the clone of a male Przewalski’s horse whose DNA has been stored at the San Diego Zoo Global since 1980, the zoo announced on Sept. 4.

It is hoped that the cloned foal will be able to breed when he is older so that he can bring genetic diversity to his species, which is currently endangered.

The Przewalski’s horse used to roam along the Mongolia-China border but has since been bred in captivity, according to National Geographic. It is considered a wild subspecies of horse because its ancestors were never domesticated.

All surviving horses of the said species are linked to 12 Przewalski’s horses born in the wild, San Diego Zoo Global said. Most of the horses currently live in zoos.

Kurt was cloned from a stallion whose cell line has been in the Frozen Zoo for 40 years. The said stallion was born in 1975 in the United Kingdom and lived until 1998. He was brought to the US in 1978.

Ryan Phelan, executive director of Revive & Restore said, “Advanced reproductive technologies, including cloning, can save species by allowing us to restore genetic diversity that would have otherwise been lost to time.”  /ra