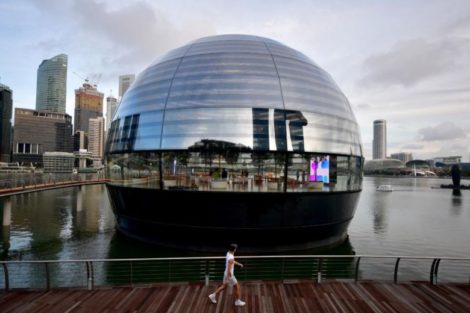 SINGAPORE — Apple unveiled its world’s first floating spherical store at Marina Bay Sands on Tuesday (Sept 8) in a preview for the media before its official opening on Thursday.

Surrounded by emerald waters and built entirely of glass, Apple Marina Bay Sands (MBS) is made up of 114 pieces of reinforced glass held together by 10 narrow mirror-like columns known as mullions. Store visitors get a 360-degree view of Marina Bay, from the ArtScience Museum to Marina Bay Financial Centre to the wide open sea, and encounter no sharp corners or obstructive columns while inside the orb.

Apart from showcasing Apple products, the interior of the dome holds the Forum, an events space centered on a video wall which will serve as the stage for Apple’s in-store events, featuring Singapore’s artists, musicians, and creators.

An oculus or clear space in the ceiling lets in shafts of light for a touch of drama.

Spread across three levels, the MBS store also has an underwater boardroom at its Basement level for entrepreneurs and developers to receive training and advice. 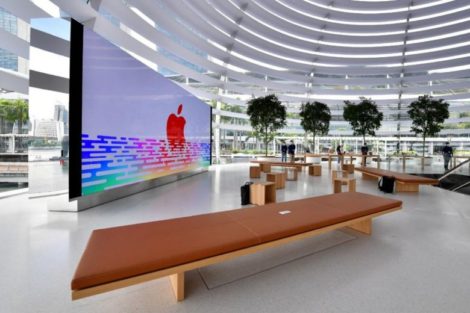 The interior of the dome holds the Forum, an events space centred on a video wall which will serve as the stage for Apple’s in-store events.ST PHOTO: LIM YAOHUI

“Apple has a deep and rich history in Singapore, having opened our first corporate office (here) nearly 40 years ago in Ang Mo Kio,” said Mr Braithwaite, who worked with global architectural practice Foster + Partners to take the concept of the floating store from first sketches in 2013 to final realization earlier this year.

“Singapore is special to us because it is an incredibly vibrant city which has a very clear vision and a continuous flow of passions and ideas which Apple can relate to,” he added.

The MBS store is manned by a 148-strong team which includes “Apple geniuses”, who are trained technical support personnel.

The store will open to the public on Thursday from 10am with safety measures in place such as a mandatory mask-up, temperature checks and social distancing. Visits to the MBS store will be by appointment only through this website.

Apple says that each non-transferable online reservation admits only one person, and visitors may have to queue before they can enter the store. From Friday, walk-ins will also be allowed.