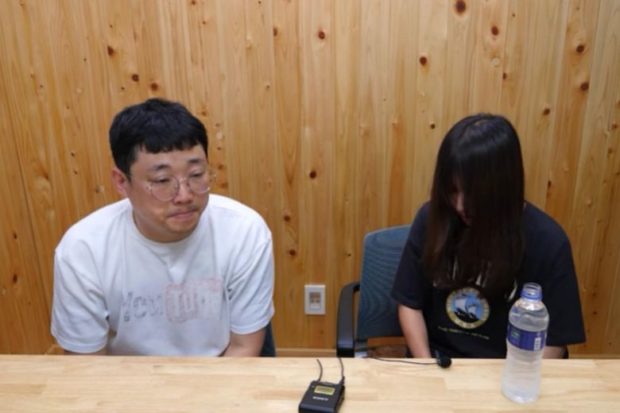 YouTuber Cham PD (left) speaks to Tzuyang, who was one of several South Korean YouTubers accused of hiding product placements in their videos. 애주가TV참PD/ YOUTUBE via The Straits Times/Asia News Network

SEOUL — A small girl with a big appetite, South Korean YouTuber Tzuyang amassed a following of more than 2.6 million subscribers for her live-streamed eating shows, famously gobbling down 240 chobab (Korean for sushi) and 1.5kg worth of yukhoe (seasoned raw beef) in different episodes.

Early last month, however, the 24-year-old quit YouTube abruptly after being bombarded online for deceiving viewers.

Tzuyang, whose real name is Park Jeong-won, is one of several South Korean YouTubers accused of hiding product placements in their videos.

The snowballing controversy has since prompted the Fair Trade Commission (FTC) to ban what is known as “backdoor online advertising” from Sept 1, requiring all social media influencers to state clearly that they are promoting a sponsored product or service.

A video on YouTube, for instance, must specify in the title that it is sponsored. The video itself must also carry a banner stating it is a paid promotion.

Live-streaming videos must inform viewers every five minutes about the paid advertising.

“Pay to play” practices online have long been a subject of criticism, but, until now, there were no clear rules for influencers to follow.

Last November, the FTC slapped a 270 million won fine on seven companies, including British home electronics maker Dyson and South Korean cosmetics giant Amorepacific, for engaging in undisclosed advertising campaigns with certain influencers on Instagram. They gave a total of 1.15 billion won in cash and free goods to these influencers to feature them on their Instagram pages, according to the FTC.

But the influencers were not penalized as there were no rules then requiring content creators to be open about sponsorship.

Even with the start of the new ban, observers say it might be challenging for the authorities to enforce the rules and keep influencers in check.

A study by the Korea Consumer Agency showed that only 30 percent of 582 advertising content posted on 60 most popular social media platforms in South Korea between October and November last year indicated they were sponsored, and in ways that cannot be viewed clearly, for instance, in only the video description.

Disguised marketing has long been used online to reach out to consumers in less blatant ways, such as advertisements looking like news articles, and “fake” reviews.

A lawmaker in January proposed a Bill to fine influencers for deceptive advertising, but it was left hanging after a new parliament was voted in in April.

Last month, YouTuber Cham PD, who has nearly 1.3 million subscribers, accused several fellow YouTubers of deceptive advertising, adding that he has collected evidence for the past two years.

Dozens of YouTubers, including popular eating channel hosts Boki, YangPang and Tzuyang, ended up posting teary-eyed apologies that drew a barrage of criticism from fans, most notably those who pay a premium subscription that offers ad-free access to content on the video platform.

Twitter user Dalmoon wrote about feeling “very disappointed” to know that Boki’s videos contained paid advertising, while another user, Daydream_love, felt “betrayed”. “These are the channels I watched and laughed a lot over, but now I feel so upset and regretful,” Daydream_love wrote.

Media studies professor Choi Se-Jung at Korea University said viewers think they have an intimate relationship with YouTubers, which is why they feel angry and betrayed when they realize that the YouTubers had cheated on them and made profits through disguised product placements.

“The influencer market is much more volatile and responsive to consumers… Mistakes that influencers make can directly impact their livelihood, that’s why they would apologize or quit the channel,” he said.

Aspiring actor Choi Han-na, 25, said sponsorship disguised as “nae ton nae san” is “clearly a scam deceiving viewers” and makes it unfair for other YouTubers who conscientiously indicate product placement in their videos.

Student Kim Su-hye, 25, said she believed YouTubers when they said they bought products with their own money for reviews. “I think the new law is necessary to stop people from taking advantage of false advertising,” she said.