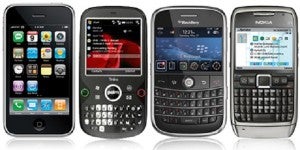 The Philippines was noted as the fastest-growing market, with the value of smartphones sold growing by 402 percent in the first quarter of 2012 over the same period in 2011.

“In developing Southeast Asia where smartphone penetration is still nowhere near saturation levels, we can be sure that the current sales spurt will carry on for at least the next few years,” he said.

With much of the populace still not owning a mobile phone, there is no better place for global mobile phone brands to focus their sales and marketing efforts,” he said.

The size of the smartphone market in the Philippines, however, remains small compared with its neighbors. Smartphone penetration in the country at the end of March was pegged at 29 percent, less than half the penetration rate in Indonesia. The region’s most mature markets were Malaysia and Singapore, where penetration rates were at 90 percent for both countries.

“The largest smartphone market in this region expectedly is Indonesia, which has a smartphone penetration rate of 62 percent and enjoyed sales exceeding $1.4 billion last quarter,” Tan said.

In an e-mail to the Inquirer, GfK Asia said smartphone sales in the Philippines were at $265 million in the first quarter of the year.

For users in the region, GfK noted an increasing preference for touch devices like Apple’s iPhone and countless other devices running on Google’s Android operating system, showing a shift in preference from the once-popular BlackBerry devices sold by Canada’s Research In Motion.

The research company said seven in 10 smartphones sold in the region on Thursday had “touch-only” interfaces, as opposed to BlackBerry devices that mostly feature physical keypads.

Another interesting development, GfK Asia said, has been the brisk sales enjoyed by the increasing number of smartphones equipped with advanced camera features.

“Over 35 percent of all smartphones sold in Southeast Asia in the first three months of the year were equipped with a camera of eight megapixel or more, as compared to figures one year ago which was only 12 percent,” GfK said.