Researchers want to create a digital Venice for posterity 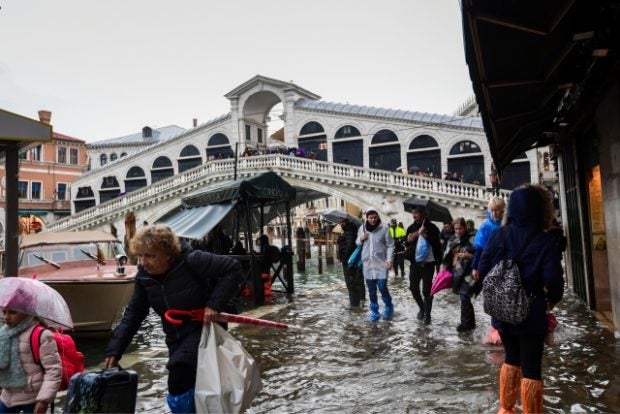 In recent years, the Italian city of Venice has suffered frequent flooding, which threatens the preservation of its cultural heritage. Image: Miguel Medina/AFP

What if Venice was doomed to disappear for eternity, submerged by water? After Venice faced historic floods last November, a team of European scientists began digitizing several monuments of the Italian city in July. The goal? To preserve Venice’s cultural heritage by creating a digital version of the City of the Doges.

Researchers from the Factum Foundation got this ambitious project (which is supported by the Fondazione Giorgio Cini, the Ecole Polytechnique Fédérale de Lausanne and the start-up Iconem) off to a start with the digitalization of the mythical Basilica of San Giorgio Maggiore.

Located on a small island of the same name, this basilica is one of the most visited monuments in the Italian city, which is visited by between 25 and 30 million foreign tourists every year.

Scientists used drones and the laser remote sensing technique, known as LiDAR, to photograph and capture the island of San Giorgio Maggiore in great detail. It took them a full day to map the interior of the famous basilica and its bell tower in this way.

Laser sensors deployed via portable units allowed the researchers to map San Giorgio Maggiore in its entirety, using data recorded in more than 600 different locations throughout the island. They were then able to reconstruct a 3D copy of the Venetian destination with the help of photogrammetry software.

From 6th to 17th July, a team from Factum Foundation will be in #Venice to carry out the #recording of the Island of San Giorgio Maggiore. Working with the @fondazionegcini, @epflcampus and @ic0nem , the aim is to record the entire island using several recording methods such as aerial and ground-based #photogrammetry and #LiDAR recording.⠀ ⠀ This initiative will serve as a pilot project to record the whole of Venice. Factum Foundation and the Fondazione Giorgio Cini have been working together since 2006 and launched #ARCHiVe (Analysis and Recording of Cultural Heritage in Venice) in 2018. #culturalheritage #newtechnologies #innovation #venezia #italianheritage #sangiorgiomaggiore #drone #collaboration #factumfoundation #fondazionecini #epfl

“The aim was to demonstrate that technologies such as aerial and ground-based photogrammetry and LiDAR recording could eventually be used to record the whole of Venice,” explained the Factum Foundation.

While the global health crisis has made such endeavors more complicated, Italian authorities are continually investigating ways to preserve the architectural treasures of Venice, which are threatened by increasingly frequent “acqua alta.”

For instance the MOSE project (acronym for Module Experimental Electromechanical Experimental Module) would consist of installing 78 floating floodgates that would close the Venice lagoon in the event of a rise in the Adriatic Sea. However, problems of extra costs and workmanship issues have considerably slowed down the progress of the project’s construction work, which is now set to be completed in 2021. NVG