There was a despondent air about Geronimo Barcena while recalling the encounter he and his fellow rangers had with tamaraw poachers in Mounts Iglit-Baco National Park, Occidental Mindoro, last August.

The park had been closed to visitors since the community quarantine took effect in March due to the COVID-19 pandemic. So when they heard a loud bang echo throughout the park around 6 p.m. of Aug. 26, they knew something was amiss.

Barcena and his companions monitored the poacher’s movements as they waited for the other rangers to make the long, steep climb up the mountain. The next two days were spent patrolling the area in search of the offender that managed to weasel their way into the park. 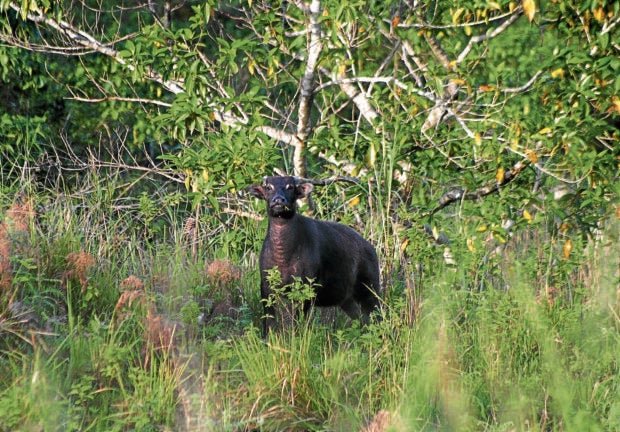 The twelve rangers treaded the course of the poacher on Aug. 28 and came upon an area that had been used as a resting site. There, they found drops of dried blood.

They followed the trail of dried blood and a kilometer or so later, were able to spot the poachers. There were in fact three of them, but Barcena said one was able to flee. The other two poachers willingly gave up their shotguns and surrendered upon being surrounded by the rangers.

Discovered with them was a sack of tamaraw meat being sun-dried into tapa (buffalo bush jerky).

(They told us it was for food, then some are for sale. We asked them if there are people behind them who gave orders, if there are others. They refused to speak.)

Unarmed in the face of poachers

Coming face to face with poachers is always a fraught experience for the tamaraw rangers and wardens of the Department of Environment and Natural Resources’ Tamaraw Conservation Program and MIBNP’s Protected Area Management Office.

Their lives are on the line. To go up the remote mountainous terrain to patrol for 22 days at a time means accepting the possibility of never making it down.

Whereas poachers brazenly arm themselves with guns, the rangers and wardens are not authorized to carry weapons and do not have handcuffs for restraining. They only use binoculars and a point-and-shoot camera in patrolling and monitoring 2,500 hectares of the 106,665-hectare park where the tamaraws are known to live.

Barcena, who has been a tamaraw ranger for the past 11 years, told INQUIRER.net that they rely on sheer number and strategy instead.

At the time, Barcena said they were ordered by the authorities to bring the poachers back along with their evidence. But the terrain of the park is rugged and the rangers, who have been patrolling 24/7 for the past couple of days, have gone weary.

As they were making their way down the mountain, the two poachers took their chance and broke into a run, disappearing into a jungle.

The problem, Barcena admitted, was they trusted too much.

(It’s OK with those who follow. We only caught two and they even got away. That’s what hurts.)

At first look, the tamaraw or Bubalus mindorensis can be mistaken for a kalabaw — but it isn’t. It is smaller and has darker, thicker hide. Its horns are shorter and unlike the carabao’s that elegantly curve into a C-shape, theirs form a sharp, severe V. Tamaraws are also endemic, or can only be found, in the island of Mindoro and are considered critically-endangered, the last stage before extinction. Thus far, two tamaraws in the park have been killed since April.

Mounts Iglit-Baco National Park, an ASEAN Heritage site, is home to at least 480 of about 600 of the world’s last tamaraws. But the pandemic, which has upended the tourism activities of the park, has left 32 out of 35 wardens and one out of 24 rangers under threat of losing their jobs.

This lack of income security and implementation of physical distancing guidelines due to COVID-19 have at once limited their manpower on the ground and made the tamaraws more vulnerable to poachers.

Before the pandemic, the rangers and wardens were free to roam the sprawling park and were able to regularly consult with the indigenous Taw’buid, Buhid and Iraya Mangyan that live around the area and who would give them information about poachers. Several of the affected wardens of the park are members themselves of the three Mangyan ethnolinguistic groups.

Neil del Mundo, coordinator of the Tamaraw Conservation Program, surmised that poachers, who are usually lowlanders, have become more aggressive due to the limited patrolling in the park.

Del Mundo told INQUIRER.net that they are currently conducting an investigation due to the recent incident and will be turning it over to the authorities to file cases against the poachers, who the rangers were able to interrogate and identify.

The United Nations Development Programme’s Biodiversity Finance Initiative launched the #TogetherforTamaraws campaign last July in a bid to help the tamaraw rangers and wardens in the state of precarity. As of Sept. 10, 81% of the campaign’s goal or $18,619 out of $22,980 (approximately P904,500 out of P1.1 million) has been reached.

Ann Dumaliang, managing trustee of the Masungi Georeserve and co-founder of the Philippine Parks and Biodiversity, decided to augment the fundraiser and organized the Tamaraw Society initiative to encourage 20 organizations to pledge P20,000 to the cause.

“Nakakatuwa yung Pilipino (Filipinos were amazing) in the last weeks we’ve been running the initiative. We really felt that there was bayanihan involved and people really understood their individual action means something and it should not be foregone,” she said.

Perhaps the only difficult thing in the beginning, she said, was getting people to understand just how urgent and impactful their contributions can be to the rangers and wardens.

“When you read through it online — it’s a fundraiser, yes — [but] actually every bit of that has an impact on the lives of people on the ground,” she said. “We already know right now, wala silang sweldo. Kapag wala silang sweldo ibig sabihin wala rin silang makakain. Wala silang makakain, wala silang mabibigay sa mga pamilya nila and they’re conserving a critically-endangered species who rely on their patrolling activities for survival. [It’s] very clear for us kung anong mangyayari kapag nawala yung mga tamaraw rangers natin at a time when environmental opportunism is very prevalent.”

Even before COVID-19, Dumaliang said they have been pushing for the welfare of the tamaraw rangers and wardens. The rangers only earn around P7,000 to P12,500 a month, while wardens are given an allowance of P3,000.

The rangers serve on contractual basis which get renewed every six months, whereas the wardens are not employees but volunteers to augment the patrolling of the rangers, according to del Mundo. They also do not have the usual benefits and bonuses that come in being regular employees, since the Tamaraw Conservation Program is not an established office by the DENR.

“They [are] pursuing all of this because of the passion that they have for conservation. For doing something as big as conserving a national heritage — something endemic to us, [one of] the largest mammals that we have in the country, not to mention protecting a key biodiversity area — we believe that they definitely deserve more than that,” said Dumaliang.

One need not look far to realize just how critical conservation is crucial to wildlife and the environment. The COVID-19 pandemic ultimately started because of the pillaging of habitats and the natural world, said Dumaliang.

And now, it seems the repercussions are catching up. Almost 900,000 people the world over have died due to COVID-19, as of the World Health Organization on Sept. 9.

“This zoonotic disease, it came because of continuous destruction, unnecessary interaction of wildlife with people, [because] they were driven out of their homes or their homes were destroyed and because of that, we have infectious diseases like this passed on to the population,” she said. “If there’s anything that this pandemic really puts into perspective, it’s how the health of people really relates to the environment they’re moving in.”

A wake up call

What now, then? According to Dumaliang, Filipinos must look at the state of the environment and respect the planetary boundaries of nature if they want to preserve and care for their health.

“We have this belief that we exist apart from nature… One of the best ways [perhaps] for us to overhaul all of this, create lasting change, is really to find a way to instill empathy towards our natural environment. It’s really the level of apathy that we’ve reached because of the lack of interaction that has led us to this point,” she said.

Because of COVID-19, she also hopes that efforts can be done to push for a green recovery. It cannot just be work contained and relegated to the hive mind of scientists or policymakers, but work which involves individual commitments that would eventually lead to collective action.

Meanwhile, Barcena said he would want to see the Tamaraw Conservation Program be recognized as an actual office by DENR, and not just a program. This would benefit him and his fellow wardens and rangers because they would no longer carry the uncertainty of losing their jobs anytime.

He also hoped that more support be given to the rangers and wardens during the pandemic. If not in manpower, then at least in the form of appropriate equipment or gadgets that would better help them track armed poachers without getting too close.

But whatever happens, Barcena and his fellow rangers and wardens are sure of one thing. They are prepared for anything, even if it means risking everything they’ve got, be it their lives.

(My heart belongs to the tamaraw. Why? Even if my life is at stake, I will do it because that is where I derive my livelihood for my family. And the tamaraw is an honor of Filipinos. Why should we not protect it?)

Baseco and the ‘kick’ from slum tourism