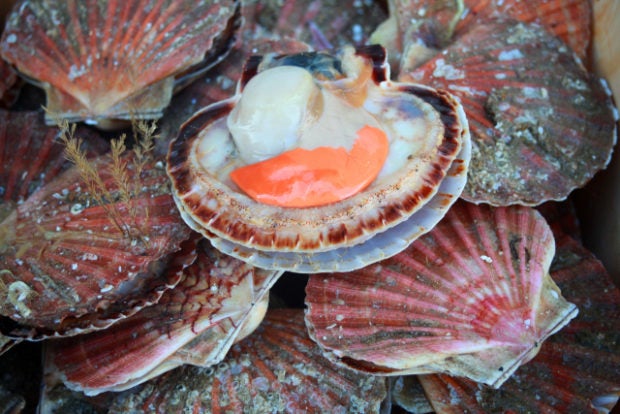 Since scallop shells contain over 95% calcium carbonate, they can be reused in various fields.
Image: Shutterstock/anyamuse via AFP Relaxnews.

As scallop season gets underway in France’s Brittany region, let us look at some innovative ways on how to “upcycle” the shells of this mollusk, thanks to its composition featuring high rates of calcium carbonate.

After having prepared a delicious carpaccio or having seared the scallops and their coral in butter and garlic, don’t throw the shells in the garbage as they can be reused and upcycled in various and somewhat unexpected ways.

In the urban environment

Upcycled shells may become part of tomorrow’s cities. In summer 2019, the city of Nice on the French Riviera, tested a new technology based on the principle of “paving drainage” for its sidewalks. This material sparks an almost immediate chill when water is poured on its surface, a rather valuable property in case of a heatwave.

The city decided to use this material for the construction of its new tramway line facilities. This new type of eco-paving can also be used in the construction of parking lots or pedestrian streets. As early as 2014, French engineering studies indicated these shells could play a role in urban construction, being crushed and added to concrete and, therefore, replacing quarry aggregate.

Scallop shells can be reused in various fields since they are made of over 95% of calcium carbonate. For instance, scientists from the Royal Belgian Institute of Natural Sciences discovered this type of natural waste could be used as part of the composition of cement. Calcium carbonate has proven its worth in the construction industry for years since it makes concrete more stable and pumpable and contributes to better siding quality.

British scientists are also working in this area. A company, Shell Recycling, plans on upcycling 4,000 tons of shells to offer the construction industry a more eco-friendly raw material, notably to build paths, decorate sidewalks or make certain types of furniture.

Japanese businesses and researchers have also worked on this material for years, since the Hokkaido island inhabitants dump over 200,000 scallop shells every year. In 2003, Japanese scientists showed that shell recycling could also benefit human health. They found that the raw material obtained thanks to the crushing of these shells had antibacterial properties as well as insect repellent. In the early 2000s, a Japanese firm called Chafwall started grinding scallop shells to make paint and insulating material.

If you are an avid gardener, you may want to consider using your discarded shells directly in your yard. The calcium they contain turns out to be great fertilizer. For instance, they can be directly added to your compost to help lower soil acidity.

Another way to upcycle scallop shells is to place them in half, facing up, next to the plants you’d like to give a boost to, with some eco-gardeners believing that these shells emit positive waves that contribute to plant health. They endorse this practice for both vegetable gardens and indoor potted plants, so you no longer have an excuse to throw your scallop shells in the bin. CC