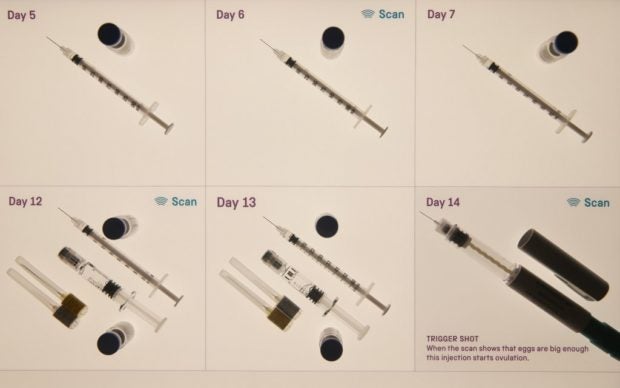 Some of the equipment required for one cycle of in vitro fertilization (IVF), are seen on display as part of an exhibition ‘IVF: 6 Million Babies Later’ at the Science Museum in London on July 23, 2018 during an event to mark 40 years since the pioneering birth of Louise Brown the world’s first IVF baby. (Photo by Daniel LEAL-OLIVAS / AFP)

A deceased gynecologist has fathered at least 17 children with women thinking they were receiving sperm from anonymous donors, a Dutch hospital said Tuesday, in the latest IVF scandal to hit the country.

Jan Wildschut worked from 1981 to 1993 at the fertility clinic of the former Sophia hospital, today called Isala hospital in the eastern Dutch city of Zwolle.

“A total of 17 donor children are currently known, in addition to the legal children of this former gynecologist,” Isala said in a statement, describing Wildschut’s actions as “morally unacceptable”.

At the time he was involved in the hospital’s artificial insemination program with donor sperm, called KID in Dutch. It was unknown whether he sired more children, the hospital said.

Learning of the news in 2019, the hospital decided to make it public together with the doctor’s family and donor children to “contribute to greater transparency” in the issue of sperm donation.

De Stentor newspaper said the matter was first discovered when a donor child discovered a DNA match via a commercial database with a niece of Wildschut, who had died in 2009.

“We never suspected that he could have been the donor,” a parent who wished to remain anonymous told the paper.

The Dutch Health and Youth Inspectorate has declined to open a probe, as “this case took place at a time when there were no laws or regulations governing fertility treatments,” the hospital said.

Last year, the Netherlands was rocked by another scandal after it came out that another Dutch doctor in Rotterdam fathered at least 49 children while inseminating women seeking treatment.