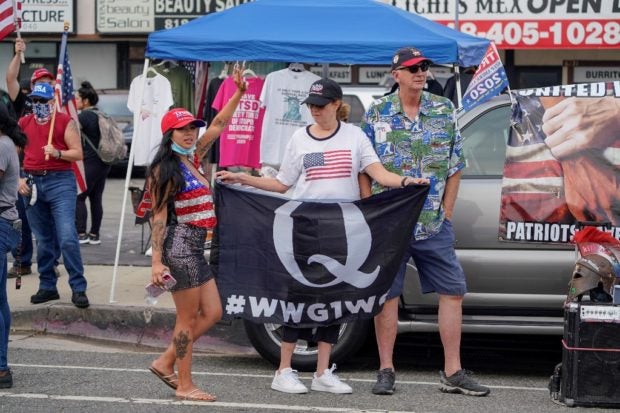 (FILES) This file photo taken on August 21, 2020 shows a supporter of US President Donald Trump waving a QAnon flag towards passing cars and counter-protesters standing across the road in Tujunga, a north neighbourhood of Los Angeles, California during a pro-Trump rally. The QAnon conspiracy movement has exploded from the US political fringe into the global mainstream during the COVID-19 coronavirus pandemic, with its influence seen at anti-lockdown and anti-mask rallies from Los Angeles, to London and Melbourne — with protesters warning, without evidence, that the pandemic is a conspiracy by a cabal of satanist pedophiles who control the world. Photo by Kyle Grillot / AFP

SAN FRANCISCO — Facebook on Tuesday announced a ban on all accounts linked to the QAnon conspiracy group at the leading social network and its image-sharing community Instagram.

The moves steps up Facebook’s efforts to clamp down on misinformation campaigns sometimes endorsed by President Donald Trump, weeks ahead of the November 3 US election.

The moves made across both Facebook and Instagram were against accounts tied to “offline anarchist groups that support violent acts amidst protests, US-based militia organizations and QAnon,” the social media platform said in a blog post.

Facebook in August removed hundreds of groups tied to the far-right QAnon conspiracy theory and imposed restrictions on nearly 2,000 more as part of a crackdown on stoking violence.

Facebook said it tightened its prohibition on QAnon after noticing that despite taking down posts directly promoting violence, QAnon supporter messages adapted to avoid restrictions.

An example given was QAnon using the platform to claim deadly wildfires raging on the West Coast were started by certain groups, which diverted attention of police and firefighters.

“QAnon messaging changes very quickly and we see networks of supporters build an audience with one message and then quickly pivot to another,” Facebook said.

“We aim to combat this more effectively with this update that strengthens and expands our enforcement against the conspiracy theory movement.”

QAnon conspiracy theorists have used public and private pages and groups at Facebook to spread “disinformation, racism, and thinly veiled incitement to violence,” according to the Anti-Defamation League.

The conspiracy theory popular with a range of right-wing extremists argung that global elite is a controlling force behind governments, banking, and more.

Twitter in July cracked down on QAnon as the loose-knit group increased its reach into the mainstream of US politics.

From an anonymous 2017 posting claiming bizarre child exploitation and deep state plots, the headless and bodiless movement has earned a place in Trump’s Twitter stream.

The FBI last year said in a report that QAnon was one of several movements that could drive “both groups and individual extremists to carry out criminal or violent acts.”