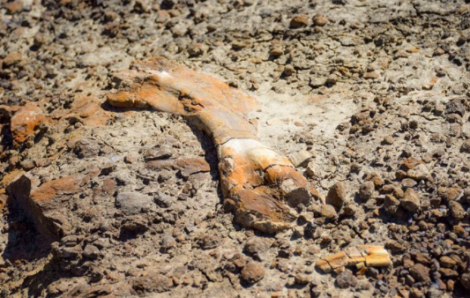 A 12-year-old boy’s hiking trip in Alberta, Canada went a notch more exciting than expected after he discovered rare dinosaur bones estimated to be around 69 million years old.

Nathan Hrushkins, an aspiring paleontologist, made the wonderful discovery while hiking with his father Dion at the Nature Conservancy of Canada’s (NCC) protected Horseshoe Canyon site, according to the organization on Oct. 15.

The father-son duo found the dinosaur bones back in July while the excavation was completed earlier this month. Paleontologists found between 30 and 50 bones.

When they found the partially-exposed bones at the canyon last July, the Hrushkins emailed photos of the bones to the Royal Tyrell Museum, which in turn identified that the fossils were of a young hadrosaur, commonly called duck-billed dinosaurs.

As the discovery was rare in the said site, the museum sent a team to uncover the bones, according to the NCC. All of the bones, which had been cleaned at the museum’s lab, belonged to a single specimen, which was about 3 or 4 years old.

“While hadrosaurs are the most common fossils found in Alberta’s Badlands, this particular specimen is noteworthy because few juvenile skeletons have been recovered and also because of its location in the strata, or the rock formation,” the NCC said.

“The rock layer where this hadrosaur was found preserves few fossils. This hadrosaur is highly significant because it will contribute to filling the knowledge gaps about dinosaurs from that time interval,” the organization added.

The NCC also noted that what the Hrushkins did was the right thing to do when making such discoveries: “take photos of the bones, record their location using a GPS or Google Earth, report the find to the Royal Tyrrell Museum and, most importantly, leave the fossils undisturbed in the ground.”

It stated that not moving the fossils is the most important thing to do as “much information is lost” when they are removed from where they originally were.

In an interview with BBC on Oct. 16, Nathan said that he was “literally speechless” after finding the bones.

“I was in so much shock that I had actually found a dinosaur discovery,” he was quoted as saying. Nathan had always been interested in dinosaurs since he was 6 years old, according to the report. Ian Biong/JB