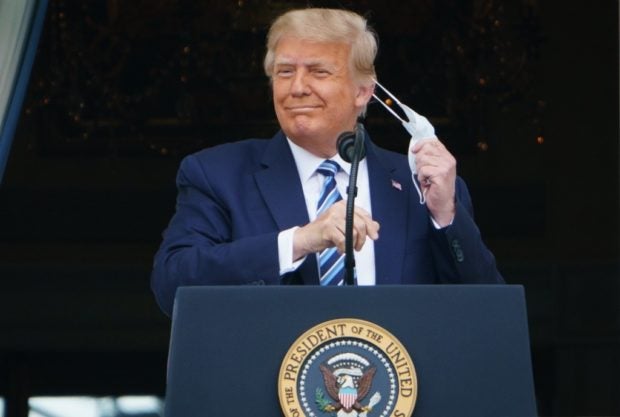 U.S. President Donald Trump takes his mask off before speaking from the South Portico of the White House in Washington, DC during a rally. Image: AFP/Mandel Ngan

It’s no news that the American political landscape is polarized. Researchers at Carnegie Mellon University have recently discovered that this polarization also affects the way Americans speak, with Republicans and Democrats using different lexicons to talk about current social issues.

While researchers found that a vast majority of words mean the same to Republicans and Democrats, they identified some pairs of words that have very different meanings and usage for people on opposing sides of the political divide.

For instance, the term “mask” among liberal commenters is roughly equivalent to “muzzle” for conservatives. The same phenomenon was observed with the pairs “liberals” and “libtards” as well as “solar” and “fossil.”

“Some of these so-called misaligned pairs seem pretty obvious. But it’s surprising how different some of them are. It gives you a sense of the really tragic polarization that exists today,” commented Mark S. Kamlet, University Professor of Economics and Public Policy and co-author on the study.

“We think our method is powerful because it’s efficient. You don’t have to read millions of comments. But if you know that ‘mask’ translates into ‘muzzle,’ you immediately know a debate is going on surrounding freedom of speech and mask use,” Ashiqur KhudaBukhsh, a project scientist in the School of Computer Science’s Language Technologies Institute and co-author on the study, said in a statement.

However, some researchers have pointed out the limits of using machine translation methods to analyze the polarization of American political discourse in recent years.

“What we need is not machine translation. What we need is perspective-taking and explanation—two things that AI algorithms are notoriously bad at,” Morteza Dehghani, an associate professor at the University of Southern California, told Wired. IB

Borat preys on Giuliani and Trump fans in outrageous sequel

‘Don’t be afraid’ of COVID, ‘get out there,’ Trump says as he returns to White House

Joyce Burton recovers from COVID-19, believes she got virus in cafe