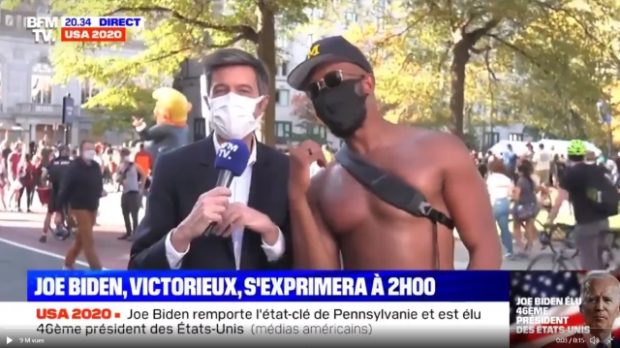 Maxime Switek got more than he bargained for when he asked Meka Anyanetu (right) to answer a few questions on live TV following Joe Biden’s victory. Image: BFMTV/Twitter via AFP Relaxnews.

Ah, the joys of live television. While French journalist Maxime Switek was speaking live from Washington D.C. on news channel BFMTV following the announcement of Joe Biden’s victory in the United States presidential election, an ebullient American was only too keen to share his joy, as well as his love of France.

The hilarious clip soon went viral worldwide on Twitter and Forbes managed to track down the person that the internet had been calling “omelette du fromage” guy.

Meka Anyanetu is evidently something of a Francophile. The 30-year-old became a Twitter sensation after agreeing to answer a few questions in a live broadcast by Switek, speaking from Washington D.C. on France’s BFMTV.

“I love a croissant… I love an omelette du fromage [sic],” he told the journalist, who could not help but laugh as he talked through his face mask.

The clip was shared on Twitter by Pierre Le Texier, communications adviser with the “Renaissance” delegation to the European Parliament.

Le Texier captioned the clip “J’en chialle,” which translates to “I’m crying.” The video has garnered over 86,000 likes and has been watched more than nine million times after going totally viral.

A star is born

After sharing his joy about Biden’s victory in the U.S. presidential election, the shirtless but face mask-clad American followed up by declaring his love of France.

“I’ve been to France, it’s beautiful. I ate escargot. I love a croissant, hon hon hon. I love an omelette du fromage, hon hon hon,” Anyanetu continued when the BFMTV correspondent thought the interview was over.

Tracked down and interviewed by Forbes on Nov. 8, Anyanetu said he had studied French at the University of Michigan and that he is a big fan of France.

“The French are great,” he said. “I love French food. I love the basic jam there. I love the clothing. I definitely want to come back there and I can’t wait to travel. That was one of my plans this year that was canceled by COVID.”

Caught in the euphoria of the historic moment, the Francophile has a slight lapse in grammar, declaring his fondness for “omelette du fromage,” when the correct way of saying “cheese omelette” in French is “omelette au fromage.”

However, he told Forbes that, in the heat of the moment, an episode of the Cartoon Network show “Dexter’s Laboratory” popped into his head, where the main character is trying to learn French and gets stuck repeating the phrase “omelette du fromage.”

Anyanetu said he hoped he had not offended anyone.

“Not only have I been in France, but I’ve traveled by myself,” he said. “Let your audience know and let the Francophone world know that. I’m not just some oblivious American who watched one TV show.”

On the back of his media buzz, Anyanetu has decided to make use of his newfound and unexpected international fame by using a Venmo account to raise funds for his next trip to France.

“I also need money for a new shirt,” quipped the internet star.

Meanwhile, Switek, the journalist, only had good things to say of this moment of TV gold.

“What’s really nice is that it’s a burst of laughter that’s making a buzz! Both of us found it funny, we really had a laugh, and I’m a good audience, so I was cracking up, and it makes me happy that this laughter has done everybody good,” said Switek. “I think that’s a good thing.” CC

Kanye West votes for himself in 2020 US elections: ‘Someone I truly trust’