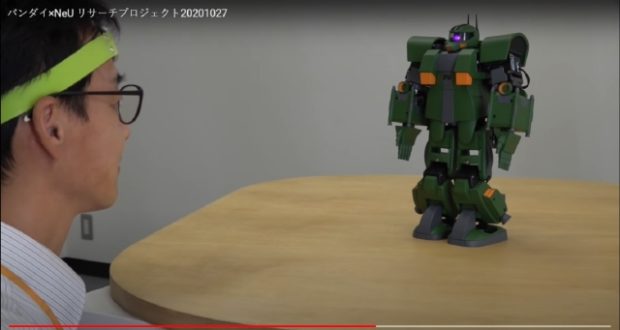 NeU has built a toy robot prototype controlled directly by the mind of the user. Image: YouTube/NeU via AFP Relaxnews.

Researchers at NeU, a joint venture between Tohoku University and Hitachi, have developed a prototype toy robot controlled directly by the mind, in collaboration with toy giant Bandai.

This robot, called Zeonic Technics, is a toy designed to help teach science and technology to children. The NeU scientists created a way to interact with the toy by linking the user’s brain to a mobile application dedicated to the robot.

The solution consists of a sort of headband placed around the head of the user. It integrates a brain activity sensor capable of measuring blood flow to the front of the brain. This activity, more or less intense, is transferred in real time to a mobile application that controls the robot’s movements. As a variety of movements have been pre-programmed, each variation in brain activity corresponds to a very precise gesture.

While the results are spectacular, at the moment, they are still limited to just a few movements. We cannot help, however, but wonder if brain-controlled toys are going to be the future of scientific toys made in Japan. CC