'One heck of a ride': SpaceX launches astronauts into space | Inquirer Technology

‘One heck of a ride’: SpaceX launches astronauts into space 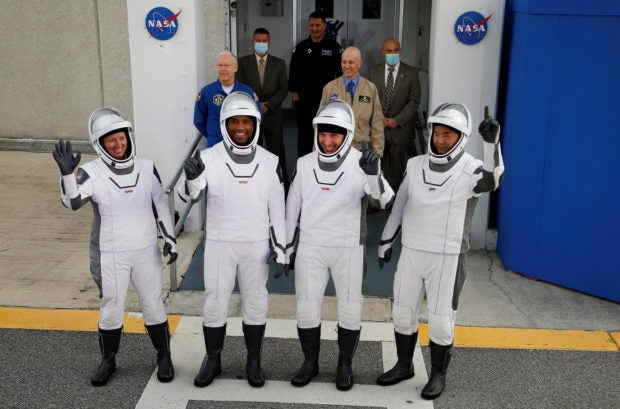 “That was one heck of a ride,” astronaut Mike Hopkins said from Crew Dragon to SpaceX mission control about an hour after liftoff. “There was a lot of smiles.”

Crew Dragon will gradually raise its orbit for the next 27 hours through a series of onboard thruster firings, giving the astronauts time to eat pre-packaged dinners and roughly eight hours to rest before docking at the International Space Station at 11 p.m. eastern time on Monday.

An air leak caused an unexpected drop in capsule pressure less than two hours before launch, NASA officials said. But technicians said they conducted a successful leak check, and the scheduled launch was still on.

The Resilience crew includes Hopkins and two fellow NASA astronauts, mission pilot Victor Glover and physicist Shannon Walker. They were joined by Japanese astronaut Soichi Noguchi, making his third trip to space after previously flying on the U.S. shuttle in 2005 and Soyuz in 2009.

The 27-hour ride to the space station, an orbiting laboratory some 250 miles (400 kilometers) above Earth, was originally scheduled to begin on Saturday. But the launch was postponed for a day due to forecasts of gusty winds – remnants of Tropical Storm Eta – that would have made a return landing for the Falcon 9’s reusable booster stage difficult, NASA officials said.

The astronauts donned their custom white flight suits and arrived at the Kennedy Space Center launch pad on schedule at 4:30 p.m. in three white Tesla SUVs, flanked by NASA and SpaceX personnel.

SpaceX mission operator Jay Aranha, speaking from the company’s Hawthorne, California headquarters, told the crew to “have an amazing trip, and know that we are all for one.”

Mission commander Mike Hopkins responded, saying “to all the people at NASA and SpaceX, by working together through these difficult times, you’ve inspired the nation the world.”

Vice-President Mike Pence attended the launch and said beforehand that under President Donald Trump, America had “renewed our commitment to lead in human space exploration.”

President-elect Joe Biden Tweeted his congratulations, saying the launch was “a testament to the power of science.”

NASA is calling the flight its first “operational” mission for a rocket and crew-vehicle system that was 10 years in the making. It represents a new era of commercially developed spacecraft – owned and operated by a private entity rather than NASA – for sending Americans into orbit. 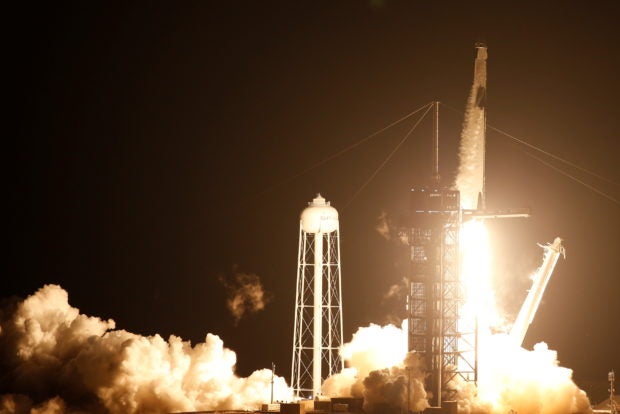 A trial flight of the SpaceX Crew Dragon in August, carrying just two astronauts to and from the space station, marked NASA’s first human space mission to be launched from U.S. soil in nine years, following the end of the space shuttle program in 2011. In the intervening years, U.S. astronauts have had to hitch rides into orbit aboard Russia’s Soyuz spacecraft.

NASA contracted SpaceX and Boeing in 2014 to develop competing space capsules aimed at replacing its shuttle program and weaning the United States from dependence on Russian rockets to send astronauts to space.

SpaceX’s launch on Sunday was the first of six operational missions for NASA. The company has also booked private astronaut missions, including one slated to carry actor Tom Cruise in the coming years.

Musk, the billionaire SpaceX chief executive who is also CEO of electric carmaker and battery manufacturer Tesla Inc, did not watch the liftoff from the Kennedy Space Center launch control room, NASA officials said. Musk said on Saturday he “most likely” has a moderate case of COVID-19.

SpaceX and NASA have conducted contact-tracing and determined Musk had not come into contact with anyone who interacted with the astronauts.

“Our astronauts have been in quarantine for weeks, and they should not have had contact with anybody,” NASA chief Jim Bridenstine said on Friday. “They should be in good shape.”