NEW YORK  — The latest phone in Samsung Electronics Co.’s Galaxy line, which has emerged as the biggest competitor to Apple’s iPhone, will go on sale in Europe on May 29 and in the U.S. this summer, the company said Thursday.

The Korean company showed off the phone at an event in London. It has a high-definition touch screen that’s nearly twice the size of the iPhone’s, but it’s thinner and lighter than Apple Inc.’s phone.

Samsung said the phone will go on sale in 145 countries with 296 phone companies, making it the company’s biggest launch so far.

In the U.S., Japan and Korea, the phone will use fourth-generation, or 4G, networks for faster data downloads. Samsung didn’t say which carriers would sell it, but the previous Galaxy model was sold by all four national U.S. wireless carriers: Verizon, AT&T, Sprint and T-Mobile. 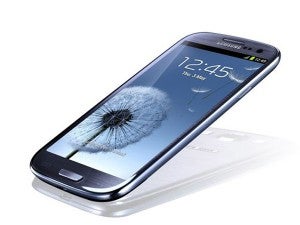 This product image provided by Samsung shows the latest phone in the company's Galaxy line. The phone, which has emerged as the biggest competitor to Apple's iPhone, will go on sale in Europe this month and in the U.S. this summer. (AP Photo/Samsung)

Like previous Galaxy phones, the new S III will run Google Inc.’s Android software. The processor, or “brains” of the device, will be upgraded to include four computing cores. The iPhone and most other high-end phones are “dual-core,” but there are some quad-core devices on sale already.

The added computing power will be put to use in the S III’s expanded voice-command features. When the phone screen is off, owners will be able to “wake” it up by saying “Hi, Galaxy.” They can then give further spoken commands. When Apple launched the iPhone 4S last year, it also made advances in voice recognition a central selling point.

Samsung doesn’t release phone shipment figures, but most analysts believe its smartphones outsold Apple and its 35.1 million iPhones in the January-to-March period. Canaccord Genuity analyst Michael Walkley believes Apple and Samsung together accounted for virtually all the profits in the phone industry in the first quarter, with three-quarters going to Apple by virtue of its singular focus on the high-priced iPhone.