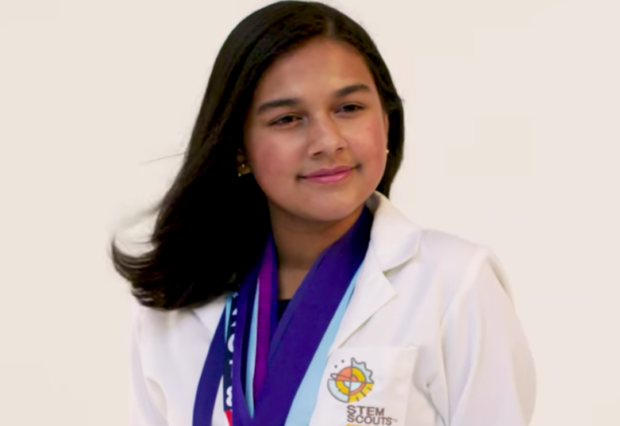 Time magazine has hailed 15-year-old inventor Gitanjali Rao as its first-ever “Kid of the Year” for the impact of her many achievements in the field of science.

The brilliant young scientist, who lives in Colorado, USA, stood out from a field of more than 5,000 Americans aged 8 to 16 due to her efforts to solve various issues including water contamination, opioid addiction and cyberbullying.

In an interview released on Dec. 3 with award-winning Hollywood actress and Time contributor Angelina Jolie, Rao shared her inventions and what inspired her to tackle such endeavors.

“I feel like there wasn’t really one specific aha moment. I was always someone who wanted to put a smile on someone’s face. That was my everyday goal, just to make someone happy. And it soon turned into, How can we bring positivity and community to the place we live?” Rao shared.

She then recalled that when she was in second or third grade, she “started thinking about how can we use science and technology to create social change.”

By the time she was 1, Rao was already telling her parents that she wanted to research carbon nanotube sensor technology at the Denver Water quality research lab.

From her research on the said technology, Rao has been able to invent a device that can detect lead in drinking water. She is currently working on a solution to detect bio-contaminants, such as parasites, in water.

Rao, who shared that her process is to “observe, brainstorm, research, build and communicate,” emphasized that her goal is to help solve the world’s problems while also inspiring others to do so.

“My goal has really shifted not only from creating my own devices to solve the world’s problems, but inspiring others to do the same as well.

“Because, from personal experience, it’s not easy when you don’t see anyone else like you. So I really want to put out that message: If I can do it, you can do it, and anyone can do it,” she added.

Aside from water contamination, Rao has created an app that helps prevent cyberbullying, especially among the youth.

“It’s a service called Kindly—there’s an app and a Chrome ­extension—which is able to detect cyberbullying at an early stage, based on artificial-­intelligence technology,” she explained.

“I started to hard-code in some words that could be considered bullying, and then my engine took those words and identified words that are similar. You type in a word or phrase, and it’s able to pick it up if it’s bullying, and it gives you the option to edit it or send it the way it is,” she added.

However, Rao noted that “the goal is not to punish,” but instead gives users a “chance to rethink what you’re saying so that you know what to do the next time around.”

Time partnered with Nickelodeon in picking the esteemed magazine’s “Kid of the Year,” a recognition they describe is a “barometer for the rising leaders of America’s youngest generation.”

On how Rao was chosen among the thousands of candidates for the title, Time noted that it is because of her “exceptional leadership.”

Rao, who recently achieved her goal of mentoring over 30,000 students, emphasized: “I really hope the work that all of these kids are doing identifies innovation as a necessity and not something that’s a choice anymore. I hope I can be a small part of that.” Ian Biong /ra