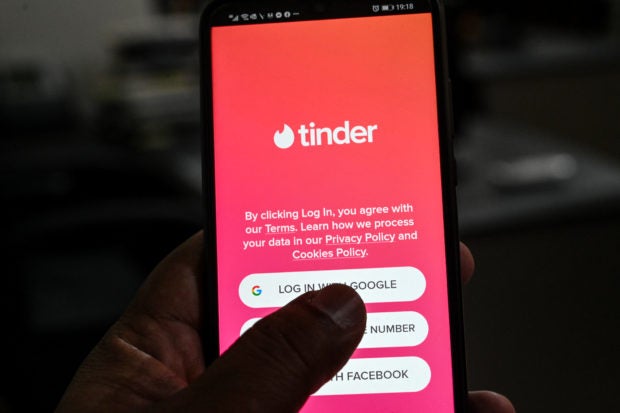 In this photo illustration taken on October 6, 2020, a user checks the dating app Tinder on a mobile phone in Islamabad. (AFP)

GENEVA–Contrary to warnings that dating apps are encouraging superficial and short-lived flings over true romance, a Swiss study showed Wednesday that app users were more likely to be seeking longterm relationships.

Mobile apps have revolutionised the way people meet around the world, and are quickly becoming the main way couples form in many countries.

Unlike traditional dating sites, which require detailed user profiles, smartphone apps like Tinder and Grindr are largely based on rating photos with a swipe review system.

This has raised fears about the impact on the ways we interact, fall in love and create lasting connections.

But a study conducted at the University of Geneva (UNIG), and published in the PLOS ONE journal, indicates that app-formed couples actually have stronger “cohabition intentions” than couples who meet offline.

“Large parts of the media claim they have a negative impact on the quality of relationships since they render people incapable of investing in an exclusive or long-term relationship,” report author Gina Potarca, a researcher at UNIG’s the Institute of Demography and Socioeconomics, said in a statement.

“Up to now, though, there has been no evidence to prove this is the case.”

Potarca used a 2018 family survey by the Swiss Federal Statistical Office, analysing responses from over 3,000 people who were in a relationship and had met their partner in the past decade.

Her analysis showed that couples who met through an app were more motivated by the idea of living together than others.

“The study doesn’t say whether their final intention was to live together for the long- or short-term,” she said, adding though that since expressed desire to marry remained high across the board, “some of these couples likely see cohabitation as a trial period prior to marriage.”

The study also found that couples formed via dating apps expressed stronger desires and intentions to have children than others.

Couples who met through dating apps meanwhile also expressed the same level of satisfaction about their relationships as those who met their partners through more traditional means.

Potarca said the findings were especially encouraging at a time when the coronavirus pandemic continues to place traditional dating out of reach for many.

“Knowing that dating apps have likely become even more popular during this year’s periods of lockdown and social distancing, it is reassuring to dismiss alarming concerns about the long-term effects of using these tools,” she said.