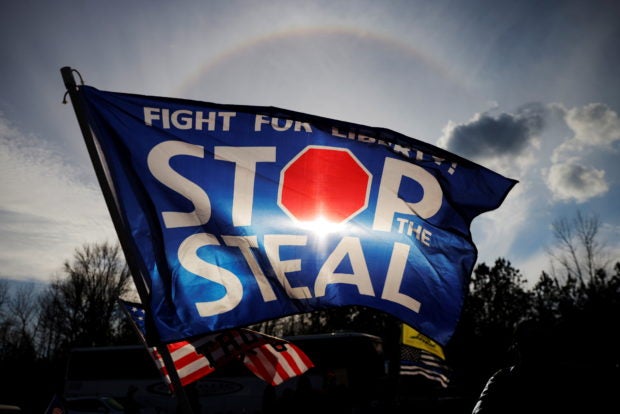 A “Stop the Steal” flag flies outside a campaign rally with U.S. President Donald Trump and Republican U.S. Senator Kelly Loeffler on the eve of Georgia’s run-off election in Dalton, Georgia, U.S. on January 4, 2021. (Reuters)

Facebook said on Monday it was treating the next two weeks as a “major civic event” and would remove certain content containing the phrase “stop the steal” from its social media platforms.

“With continued attempts to organize events against the outcome of the US presidential election that can lead to violence, and use of the term by those involved in Wednesday’s violence in DC, we’re taking this additional step in the lead up to the inauguration”, the company said in a blog post.

A Facebook spokeswoman clarified the company would allow posts that clearly share the “stop the steal” phrase to either condemn or to discuss neutrally.

In November, Facebook removed the “Stop the Steal” group in which supporters of U.S. President Donald Trump posted violent rhetoric and false claims of election fraud.

However, the company had not acted against similar rhetoric in the run-up to the election and faced criticism this week for failing to remove posts spurring on the siege of Capitol Hill.

Facebook said on Monday it would add a news digest to Facebook News during inauguration week that would include a live video of the inauguration at the U.S. Capitol on Jan. 20.

The company said it was keeping in place the pause on all advertisements in the U.S. about politics or elections.