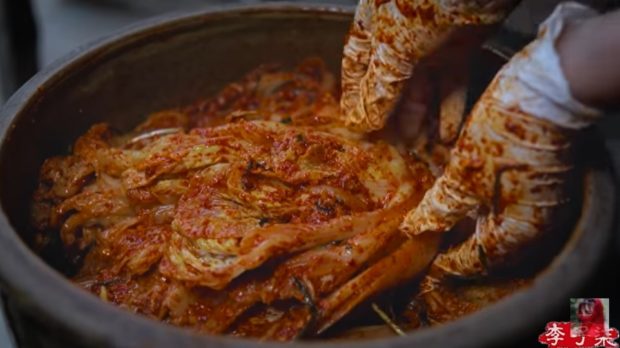 SEOUL — Popular Chinese Youtuber Li Ziqi, who has over 14 million subscribers, drew controversy in Korea after she uploaded a video of herself making what appears to be kimchi with the hashtag #ChineseCuisine and #ChineseFood.

The 19-minute video “The last episode of the ‘Life Series’: The life of white radish!” shows Li going through every step of kimchi-making, from harvesting cabbage from the ground to pickling the cabbage in a large jar and later applying spicy seasoning to it. Using her homemade kimchi, she went on to make a soup that resembled kimchi jjigae, or kimchi stew.

Shortly after her video was uploaded on Saturday, Koreans flooded the comments section on YouTube and Facebook, criticizing her for misrepresenting the traditional Korean dish as Chinese.

“I’m not saying anything about making it, but shouldn’t you at least write that it’s a traditional Korean food? When I saw the cabbage split in half I thought, ‘no way,’ but after seeing it being seasoned, I couldn’t believe my eyes,” read one Korean comment.

While China has its own pickled vegetable dish — pao cai — the preparation method and ingredient selection differs from kimchi. The choice of ingredients and method shown in Li’s video were very similar to that of kimchi.

Li, who also has over 27 million followers on Weibo, is known for her videos showing traditional Chinese culture and crafts. The 30-year-old YouTuber from China’s southwestern Sichuan province left urban life and returned to her grandparent’s home where she was raised and started making videos. Her videos received many accolades from state-run China Central Television and People’s Daily for promoting traditional Chinese culture.

In November, Global Times, the Chinese Communist Party’s mouthpiece, claimed it won an international industrial standard for making kimchi. The International Organization for Standardization refuted the claim, clarifying that the certification was for pao cai, and the standards do not apply to kimchi.