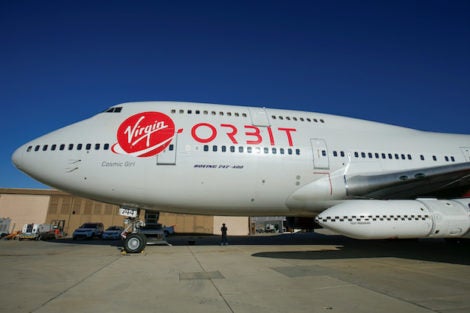 Richard Branson’s Virgin Orbit, with a rocket underneath the wing of a modified Boeing 747 jetliner, prior to its takeoff on a key drop test of its high-altitude launch system for satellites from Mojave, California, U.S. July 10, 2019. (Photo by MIKE BLAKE / Reuters)

If conditions on Sunday hold, the Long Beach, California-based company’s 70-foot LauncherOne rocket will be dropped from the wing of a modified Boeing Co 747 nicknamed CosmicGirl at 40,000 feet in the air.

The rocket will then ignite its engine to pierce Earth’s atmosphere and attempt to deliver 10 small satellites to orbit for NASA, as Virgin looks to prove its technology.

The window for the launch test originating from the Mojave Air and Space Port in southern California begins on Sunday at 1 p.m. EST (0600 GMT).

Competition is fierce between Virgin Orbit, Firefly and U.S.-New Zealand company Rocket Lab, which are designing smaller or non-traditional systems to inject smaller satellites into orbit and meet growing demand.

LauncherOne’s first attempt to reach space early last year was terminated seconds after being dropped from its carrier aircraft.

The rocket ignited its NewtonThree engine for a few seconds but cut off mid-air due to a broken propellant line, Virgin Orbit’s Chief Executive Dan Hart said in July.

Virgin Orbit has fallen behind Rocket Lab, which has already completed some 17 orbital launches, though Virgin Orbit says its rocket can haul about twice the weight.