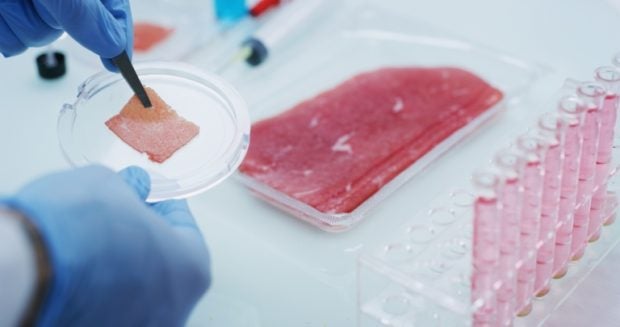 Close up of a scientist checking the cultured artificial meat sample in a modern laboratory. Image: HQuality Video/Getty Images via AFP Relaxnews

Canadian researchers have developed a new form of cultured meat that offers a taste and texture similar to that of traditional meat. Made from rabbit cells, this fake or synthetic meat could eventually replace meat as we know it, particularly given the crisis in meat supply and the consequences of meat production and consumption on the environment.

While there is some debate as to how to name and label the many meat alternatives that have emerged in recent months, and still others point to the fact that these alternatives have nothing to do with meat, researchers are moving at breakneck speed to develop new forms of cultured meat, that is meats made primarily from animal cells.

The latest find comes straight from Canada, where researchers say they have developed a new form of cultured meat based on a technique adapted from the method used to grow tissue for human transplants. They say this substitute meat that “promises more natural flavor and texture than other alternatives to traditional meat from animals.”

Published in the journal Cells Tissues Organs, the method used by researchers at McMaster University in Canada is based on stacking very thin layers of muscle and fat cells grown in the lab to form “slabs of meat.” The researchers say they can replicate the marbling and fat content of any piece of meat with this new technique.

“Consumers will be able to buy meat with whatever percentage of fat they like, just like they do with milk,” explains Ravi Selvaganapathy who worked on the project with Alireza Shahin-Shamsabadi, both from the School of Biomedical Engineering at McMaster University.

This new method was tested by making meat from available mouse cell lines. But the researchers say they then made and cooked a sample of cultured meat created from rabbit cells.

“It felt and tasted just like meat,” said Selvaganapathy.

“Meat production right now is not sustainable. There has to be an alternative way of creating meat,” said the researcher. The team believes that the new method can be adapted to beef, pork, or chicken, and is suitable for large-scale production.

And if anyone thinks it just sounds like “science fiction,” the publication states that the researchers have already created a start-up to begin commercializing this new technique. JB