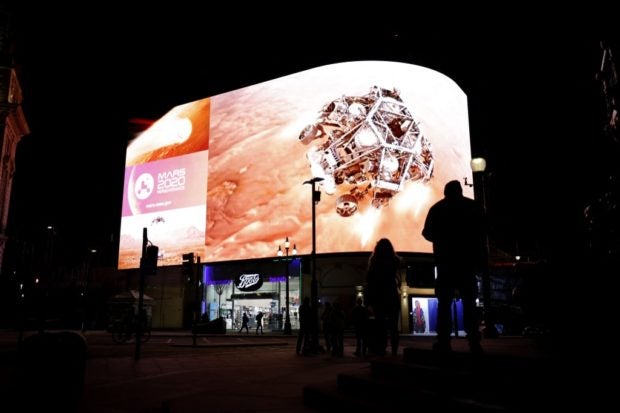 An image showing the simulation of the landing of NASA’s Perseverance rover on the planet Mars, where it will look for signs of past microbial life, cache rock and soil samples, and prepare for future human exploration, is livestreamed on the Piccadilly Lights screen in central London, on February 18, 2021. (Photo by Tolga Akmen / AFP)

WASHINGTON — The US space agency NASA on Monday released the first audio from Mars, a faint crackling recording of a gust of wind captured by the Perseverance rover.

NASA also released the first video of last week’s landing of the rover, which is on a mission to search for signs of past life on the Red Planet.

A microphone did not work during the rover’s descent to the surface, but it was able to capture audio once it landed on Mars.

“What you hear there 10 seconds in is an actual wind gust on the surface of Mars picked up by the microphone and sent back to us here on Earth,” said Dave Gruel, lead engineer for the camera and microphone system on Perseverance.

The high-definition video clip, lasting three minutes and 25 seconds, shows the deployment of a red-and-white parachute with a 70.5-foot-wide (21.5-meter-wide) canopy.

It shows the heat shield dropping away after protecting Perseverance during its entry into the Martian atmosphere and the rover’s touchdown in a cloud of dust in the Jezero Crater just north of the Red Planet’s equator.

“This is the first time we’ve ever been able to capture an event like the landing on Mars,” said Michael Watkins, director of NASA’s Jet Propulsion Laboratory, which is managing the mission.

“These are really amazing videos,” Watkins said. “We binge-watched them all weekend.”

Thomas Zurbuchen, NASA’s associate administrator for science, said the video of Perseverance’s descent is “the closest you can get to landing on Mars without putting on a pressure suit.”

Jessica Samuels, Perseverance’s surface mission manager, said the rover was operating as expected so far and engineers were conducting an intensive check of its systems and instruments.

“I am happy to report that Perseverance is healthy and is continuing with activities as we have been planning them,” Samuels said.

She said the team was preparing for a flight by the rover’s small helicopter drone dubbed Ingenuity.

“The team is still evaluating,” she said. “We have not locked in a site yet.”

Ingenuity will attempt the first powered flight on another planet and will have to achieve lift in an atmosphere that is just one percent the density of Earth’s.

Perseverance was launched on July 30, 2020 and landed on the surface of Mars on Thursday.

Its prime mission will last just over two years but it is likely to remain operational well beyond that. Its predecessor Curiosity is still functioning eight years after landing on Mars.

Over the coming years, Perseverance will attempt to collect 30 rock and soil samples in sealed tubes to be sent back to Earth sometime in the 2030s for lab analysis.

About the size of an SUV, the craft weighs a ton, is equipped with a seven-foot-long robotic arm, has 19 cameras, two microphones and a suite of cutting-edge instruments.

Mars was warmer and wetter in its distant past, and while previous exploration has determined the planet was habitable, Perseverance is tasked with determining whether it was actually inhabited.

It will begin drilling its first samples in summer, and along the way it will deploy new instruments to scan for organic matter, map chemical composition and zap rocks with a laser to study the vapor.

One experiment involves an instrument that can convert oxygen from Mars’ primarily carbon dioxide atmosphere, much like a plant.

The idea is that humans eventually won’t need to carry their own oxygen on hypothetical future trips, which is crucial for rocket fuel as well as for breathing.

The rover is only the fifth to set its wheels down on Mars. The feat was first accomplished in 1997, and all of them have been American.

The United States is preparing for an eventual human mission to the planet, though planning remains very preliminary.